8 Movie Sequels and Remakes To Watch From 2019

2019 was a year full of sequels and remakes to the world’s most beloved on-screen stories, some of which were loved by viewers, while others were poorly received. 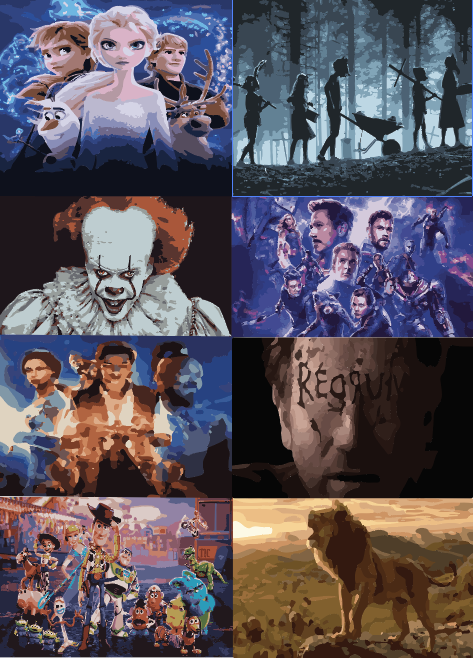 The top 8 sequels and remakes of 2019 also have artwork which has become widely known. Certain color schemes, tones or characters have allowed audiences to put a face to the name of each film.

At the end of 2018, many people’s feelings were mixed about the new films to come in 2019. Many of them were remakes or continuations of audience’s favorite childhood films, and while some people loved the idea, others were hesitant. Now that the year has come to an end, most of these sequels were well received by the general public. Out of the films released last year, these eight are among the most talked about, whether it be for being outstanding or paling in comparison the previous counterparts.

The first It film was released in 2017 and is the film adaptation of Stephen King’s novel by the same name. It was one of the most popular horror films of 2017, as it preyed on the very common yet unusual fear of clowns that many people possess.

It Chapter Two was not as well received as its original counterpart, although there were still aspects of the film that audiences did enjoy. Audiences said that while this new version did a good job in showing character development and humor, it lacked the ability to evoke fear that the original film possessed. While this sequel was still enjoyable, it took place so far in the future from the original film that many people felt a disconnect.

While enjoyable, It Chapter Two lacked the scare factors that many were looking forward to seeing. When audiences go to see horror movies, they want to feel afraid and get an adrenaline rush, and unfortunately, that is a feeling that this film didn’t offer as well as its original counterpart.

Avengers is arguably one of the most popular films in the Marvel franchise of all time, and Avengers: Endgame was the final conclusion to the story line that audiences have grown to love so dearly. Although this film is lengthy, it is action packed from start to finish and kept audiences on the edge of their seats for the entire running time. Usually, films that are as highly anticipated as Avengers: Endgame end up disappointing audiences in one way or another, but this film was so well received by audiences that it is still being talked about everywhere.

“I think the ending could have been better because it leaves you with a lot of wondering for what is next to come in the Avengers series, but it was still a good movie,” junior Joseph Wanke said.

Perhaps it is so popular due to the franchises mass success since the first Avengers movie in 2008, Iron Man. Perhaps this long running franchise with so many popular characters just gained so much momentum that audiences immersed themselves in the Avengers’ world. Even if this is the case, it does prove that the franchise itself has done very well in its 21 years of films, and audiences believe that Avengers: Endgame was the perfect end to this universe.

Aladdin is among some of Disney’s most beloved films and is known for its depiction of a different culture than the urban, western cultures Disney had previously shown. It is also known as one of Disney’s more empowering films for women, by showing Princess Jasmine in her journey to make her own choices for herself.

Many people were concerned with how the new live-action film would measure up to its original animated version. After its release, audiences were pleasantly surprised. Most enjoyed was actor Will Smith’s portrayal of Genie, played by actor Robin Williams in the original film. Will Smith proved to deliver a tear-jerking performance for many in Williams’ iconic role.

Audiences had mixed reactions to the role of Princess Jasmine in the new film. Although it was empowering for women, and included a new song in which she claimed her independence from the rules set in place for her by history, some audience members found this fascinating, while others believed it took away from the charm of the original story line.

Overall, the film was well received by audiences despite the hesitation that many had when hearing the idea.

Much like the Aladdin remake, there was a lot of controversy over the idea of remaking The Lion King. While some believed the idea was great, others believed it would ruin what is many children’s favorite story. The 2019 remake managed to add 30 additional minutes to the running time compared to the 1994 original, please viewers by keeping the story line the same, taking lines of dialogue word for word.

Although the story remains the same, many people believe that by trying to make the film look more realistic rather than animated, some of the emotion behind the original film was lost. The film was received well by critics.

“The remake was surprisingly good and the actors did a really good job, especially Beyoncé,” junior Lucy Hill said. “They didn’t change it very much from the original, which I liked.”

When hearing the news of a remake of The Lion King, many people believed that with the animation advances that have been made since 1994, that the new version would be spectacular in visuals, even if the story didn’t live up to its original appeal. As it turns out the visuals were underwhelming compared to what people had anticipated, leaving many audiences feeling either content or dissatisfied with the film. However, people were pleased that the story didn’t receive any major changes.

Although this film came later in 2019 than other popular films, it was still one of the most well received by audiences. The original movie, Frozen, has become one of the most popular animated films of all time and has received many awards, such as the Academy Award for “Best Animated Feature”, so its sequel had some big expectations to live up to. According to audiences, it did not disappoint.

The film carries on the charm that made the previous film enjoyable, including songs such as “Into The Unknown”, which most people believe is comparable to the first Frozen’s “Let It Go”.

Many audience members believe this movie was snubbed in the 2020 Academy Award nominations. Due to the awards Frozen won in 2013, many are outraged that the 2019 sequel has not received nearly as many nominations as the original.

The Toy Story franchise is one that has become more and more popular with each addition that has been released since the original in 1995. Due to this, Toy Story 4 was received well by most audiences.

The movie’s animation style remains in line with that of the previous films, continuing the charm that the series has produced over the years. However, the storyline takes audiences in a very new direction which has not been previously explored by the writers. Not only are the primary and secondary groups of toys, which are the majority of the toys from the first film, seen with another owner, whom they were given to at the end of Toy Story 3, but they are also taken to completely new territory, and have run ins with brand new antagonists. Much like Toy Story 2 and 3, we see the primary group of toys, such as Woody and Buzz Lightyear, in a new environment faced with new challenges, but the ending of Toy Story proves to be a major turn from the end of the previous films.

The film ends with one of the main characters making a major decision, changing the whole dynamic between the toys that has existed since the films first installment. Audiences were naturally thrown for a curve resulting from this ending, which had led many to hope and believe that this will be an end to the series. Although not the ending many were hoping for, it tugged at the heartstrings in such a way that would be the perfect ending to a wonderful story for children of the last two decades.

This film serves as a sequel to The Shining, released in 1980 as the film adaptation of the Stephen King novel. The Shining quickly turned into one of the most classic horror films of all time, and it is widely known by many and referenced in many other films and television shows.

Doctor Sleep was fairly well received by both critics and audiences. It follows the young boy, Danny, from The Shining on his journey through adulthood and shows how his trauma, which is due to the events that occurred with his father during his childhood in The Shining, has affected his life.

One of the things that was so appealing to audiences about The Shining was its ability to make people feel sick, almost like you were going insane along with the antagonist, Jack Torrance. Doctor Sleep continues this feeling through Danny.

Although some people felt that a sequel was unnecessary for such an incredible movie that had withstood the test of time on its own for almost 40 years, Doctor Sleep did not disappoint audiences.

“I still don’t know if ‘The Shining’ needed a second act, but ‘Doctor Sleep’ presents one that’s fresh and unsettling enough to justify its existence,” reviewer Owen Gleiberman from Variety said.

If Doctor Sleep is thought of as a separate entity from The Shining, it is perhaps even more enjoyable, although it may be difficult to understand the plot. Overall, the film creates the perfect amount of suspense and, although some felt its existence unnecessary, it has proved its worth to viewers.

The original version of this film was released in 1989 and served as the on-screen adaptation of the novel by Stephen King. Unlike the other remakes in this list that remain mostly loyal to the plot of their original counterpart, the 2019 remake of Pet Sematary changes some very important parts of the plot.

In the middle of the original film, the Creed family’s youngest child, Gage, is killed in a fatal accident, which serves as a set up for the rest of the film. However, in the remake of the film, it is the Creed family’s other child, their daughter Ellie, who ends up being killed in the accident rather than Gage, which causes major changes in the rest of the film’s plot. The film also overall feels less suspenseful than the original, and the change in plot could be part of the reason why people feel that way.

Due to this, out of all of the movies on this list this is perhaps the most disliked by audiences. If one hasn’t seen the original, then maybe this film would be more enjoyable, but it definitely pales in comparison to the original adaptation.

Despite the hesitation that many movie-goers had going into 2019, the year turned out to be a great year for film. Although the remakes were less well received than the sequels, that’s not to say that one form of continuation is better than another. It is encouraged for everyone to see these films themselves and see how they measure up. Regardless of reviews, these films brought feelings of nostalgia for many people all around the world who grew up and have good memories with these films. Even though some of these franchises may seem repetitive, there is no doubt that they tug at viewers heartstrings in ways that not many others can.