A helicopter crash in Calabasas, California takes the lives of all nine people on board. 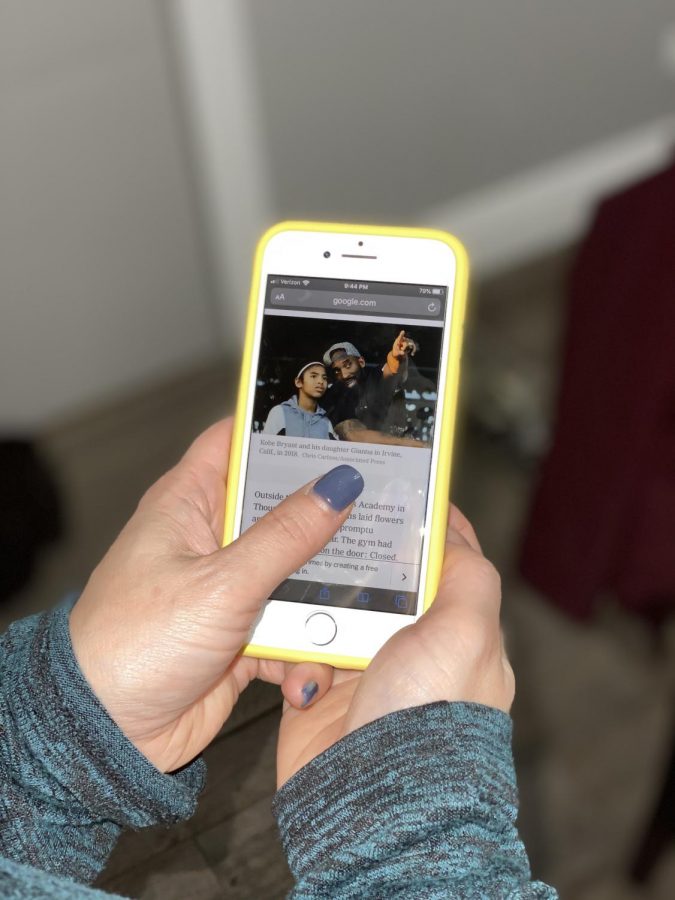 Kobe Bryant was both an inspiration on the court and off the court, allowing for students of Antioch Community High School to attach themselves to Bryant. “Bryant motivated me to play the game, work harder and push myself,” sophomore Diego McKenzie said. “I loved watching him, he’s the only guy that I really watched.”

After descending from a height of roughly 2300 feet in the air, a helicopter crashed in Calabasas, California. That helicopter contained nine people in total, including former National Basketball Association star, Kobe Bryant. Initially reported by TMZ, the retired basketball player died en route to a youth basketball game at Bryant’s own Sports Academy, in which he was scheduled to coach his second oldest daughter Gianna, who was also on board the helicopter. Fans from around the world were shocked to hear of the passing of Bryant, including sophomore Diego McKenzie, who was surprised to learn about Bryant’s death.

“I took a nap, I woke up, I was scrolling through Instagram and saw Kobe Bryant was dead,” McKenzie said. “I was heartbroken. I didn’t know what to do.”

Bryant was not the only passenger on board the helicopter. Along with Bryant and his daughter were John, Keri and Alyssa Altobelli, Christina Mauser, Sarah and Payton Chester as well as pilot Ara Zobayan. Both Alyssa Altobelli and Sarah Chester played on Gianna Bryant’s basketball team, with Mauser serving as the assistant coach of the team. John Altobelli worked as a coach for the Orange Coast College baseball team, along with having a son, John James, who works as a scout for the Boston Red Sox.

Many sports teams and leagues offered their condolences to those affected by the helicopter crash on the Sunday of and the Monday after the crash. On Monday afternoon, the Boston Red Sox announced they would provide the Altobelli family with financial and emotional aid following the tragedy; the team’s social media accounts also linked to a GoFundMe page dedicated to helping the Altobelli family with funeral costs and future living expenses.

Two hours after the Boston Red Sox announced their efforts in helping the Altobelli family, the NBA postponed a game featuring the Los Angeles Lakers to an undetermined date, per request from the Lakers Organization. The game was the first scheduled to be played after the passing of Kobe Bryant, as the Lakers were going to take on the Los Angeles Clippers at home. The next game the Los Angeles Lakers will play is on January 31 against the Portland Trail Blazers. McKenzie believes that the NBA should do something special in memory of Bryant that connects to the remainder of the NBA season.

“They should definitely change the logo,” McKenzie said. “Have a ceremony for him, change up the jersey numbers, do something special for him.”

Fans also paid tribute to Bryant on the day after the crash, with hundreds of fans arriving outside the Staples Center in Los Angeles to add on to shrines dedicated to Bryant. Outside of Los Angeles, monuments like the Empire State Building in New York City were lit in purple and gold, the same colors as the Los Angeles Lakers.

The Los Angeles Lakers, the Bryant family and crash scene investigators have not publically made statements regarding Bryant’s death as of the development of this story. Bryant played twenty seasons in the NBA with the Los Angeles Lakers, winning five NBA Championships with the team and one Most Valuable Player award. He was only 41 at the time of the crash.