Books Are For Everyone

There are aspects to every book that can appeal to every type of reader out there. 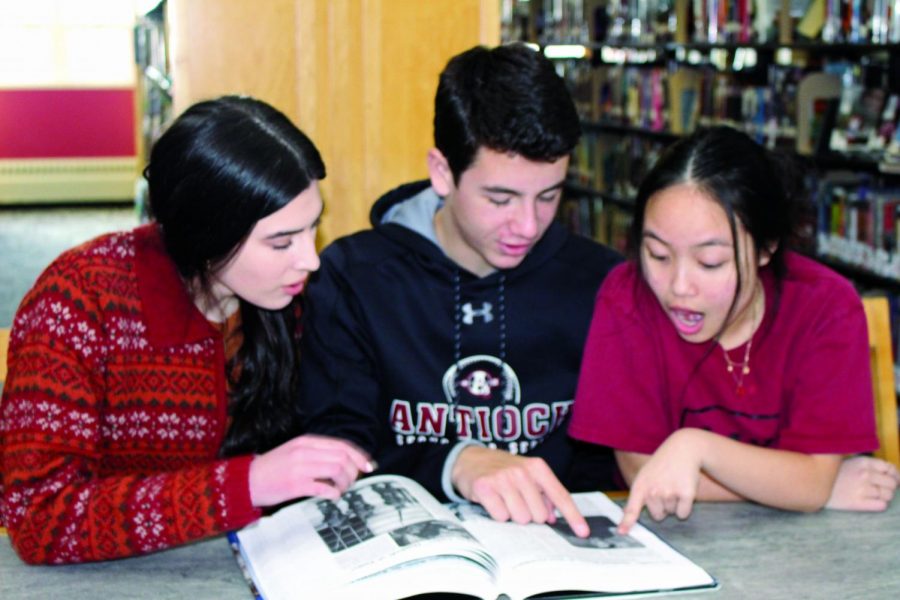 People of all genders can sit down and read a good book together, no matter the genre.

It’s hard to believe that even in the 21st century there are still gender stereotypes; however, sometimes people may be ignorant to the fact that they are still in a lot of aspects of everyday life. Something as simple as reading can be turned into a social issue because boys think that reading a romance book will take away their masculinity or girls are not drawn to action books because they do not want to lose their femininity.

“I know in both cases there are girls that love to read just purely action,” junior Jennifer Ambre said. “And boys that are romantic.”

In this generation, gender stereotypes are easily broken because there are a lot of people in this world that are willing to be more open about these topics. It is important that society is the same way with books. Reading is an essential part of life so it is important to make sure that it is as enjoyable as possible for all different types of people.

“You should read everything,” English teacher Audrey Nagel-Schoonmaker said. “That is how you learn what you like.”

If people step back and stop worrying about what others think of them, then they will be able to gain a new perspective that they did not think was even possible.

“Reading books and experiencing life, more than what is right in front of you, is huge,” English teacher Sam Worden said.

There are certain aspects to every single book that can draw a diverse group of people into it. Not everyone likes an action-packed book or a love story, but most books have a little bit of everything in them. Maybe it is time to jump into something unexpected, and here are nine books that know no gender.

This well known novel by Suzanne Collins follows the story of an independent girl living in a dystopian society about to enter the fight of her life, literally. While that part of the book can appeal to the action and adventure seekers there is still a bit of romance between a few of the characters that can appeal to the more romantic nature of some readers.

Set in Nazi Germany this book is a fictional rendition of the lives of a family trying to survive in this horrific time of mass genocide. While the book can draw in people intrigued by historical fiction, it can also bring in readers that love a heart wrenching story of love and loss that is also a prominent theme throughout this novel.

This novel showcases a “utopian” society that genetically modified human embryos to ensure that they are exactly what people want them to be. While it discusses the problems about how inhumane this type of thing is, it also dives deep into the politics of a utopian society that is completely different from this world.

This book tells the true story of the murder of the Clutter family. While it brings in the people that love a good mystery, it also shows the psychological perspective of the murderers themselves. It dives deep into a lot of different perspectives that can attract a larger group of people.

“A Prayer for Owen Meany”

In the Summer of 1953 two young boys are playing baseball together when one of the boys hits a foul ball that kills the other boy’s mother. While it sounds like a gruesome book, it actually follows the story of a boy that finds his faith through the death of his mother. While it has some aspects of a murder, it is also a heartwarming story of a young boy finding his faith.

“Confessions of a Murder Suspect”

This novel tells the story of a family that has what some people view as the perfect life: good grades, athletic and smart. It all comes crashing down when the mom and dad are murdered. While it is a mystery at the forefront, it can also be seen as a scientific book due to the fact that before his death, the dad has created vitamins in his lab that he makes his children take everyday.

In a somewhat post-apocalyptic world a father and son travel through the rough terrain of the southeastern United States. It follows the touching story of a bond between an unnamed father and son, but it is also a gruesome book about a world that has fallen apart after a tragedy has struck the nation.

Due to dangerously low reproduction rates, handmaids are assigned to a family to carry their children for them. While this does not seem so bad, but these women are forced to bear the children of people that they do not even know. This book is a dystopian-style book, but it can also appeal to those readers that have a more romantic side with some themes about forbidden romance.

A gruesome abuse story of a young African American girl whose father beats and rapes her repeatedly, “The Color Purple” follows the misfortune of a young girl named Celie. It also tells the story of Celie finding herself experimenting with her sexuality while going through such hard times.

“The Night She Disappeared”

When two teenage girls, Kayla and Gabie, switch shifts at the local pizza parlor they are unaware that someone is trying to kidnap one of them. When the wrong girl is kidnapped, Gabie is determined to find her because she was the one that the kidnapper was supposed to get. This book consistently switches perspectives from Kayla to Gabie and even the kidnapper to open the book to a diverse group of people.