Building for the Future

Another impressive season for the Sequoits comes to a heartbreaking end in the quarterfinals. 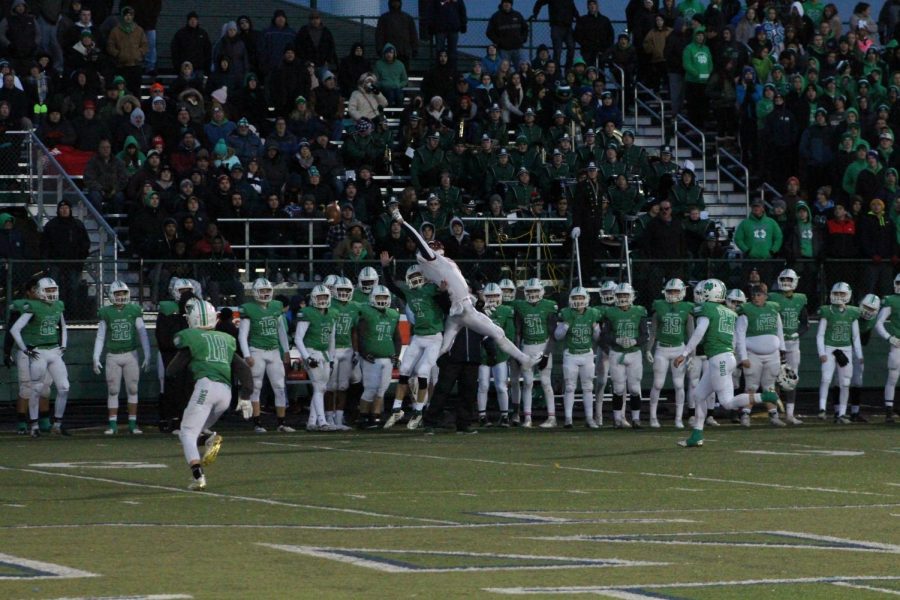 On the heels of another thriller versus the cross-town rival Lakes Eagles, this year’s Antioch Sequoits became trailblazers, as they were the first Sequoit football team in ten years to make it to the quarterfinal round of the IHSA football playoffs. The Sequoits were looking to make even more history by beating Norte Dame College Preparatory High School in Niles, Ill.

The game started off well for the Sequoits. They appeared to be in complete control as they charged down the field early. Their slow offensive starts looked to be behind them as senior Sebastian Scofield knocked an early field goal through the uprights to give Antioch the lead. After this opening drive, however, it was Dons of Norte Dame who took control, scoring two unanswered touchdowns, going up 14-3 before the first quarter had even ended.

Even after going down by 11 early, the Sequoits never lost their spirit and tenacity, and following a touchdown reception from sophomore quarterback Athan Kaliakmanis to senior receiver Benjamin Nauman, Antioch was right back in the swing of things going into halftime, only down by four.

“We played our hearts out and left what we had on the field,” senior linebacker Kevin Tebbe said.

Midway through the third quarter, Norte Dame kicked a field goal of their own, extending their lead to 17-10. It was a battle for the rest of the game as the defenses from both teams locked in and halted almost all offensive production to either side.

“The team played their hearts out in the second half,” senior linebacker Drew Smith said. “But it was two fatal plays that sealed our doom.”

The Sequoit offense had plenty of opportunities to score and draw the game to even, but all were fruitless. Senior defensive back Elias Vanderwagen came up with a clutch fumble recovery in the fourth quarter, but nothing came from it. Defensive stop after defensive stop was met with lackluster offensive production from the Sequoits.

As the clock neared 0:00, the Sequoits had the ball and were charging towards the end zone, looking to draw even or even take the lead. Then, on fourth down, the Don defense held firm, forcing a turn over on downs. As the Sequoits spent their last remaining timeout, it was all up to the defense to force a fourth down and make Norte Dame punt. No such stop came, however, as a personal foul penalty against Antioch gave Norte Dame an automatic first down, essentially sealing the fate of the 2018 Sequoits football team.

After two kneel downs by Norte Dame, the clock did reach that fateful 0:00. The game had ended and so had the Sequoit’s season. After so many spectacular games, blowout dominations and one wide left kick, the Antioch Sequoits finished their season down in Niles, with a final record of 11-1.

“We are only the fifth team in school history to make it this far,” Smith said. “Although I would have liked to go farther, I have to stop and admire how far my team and I have come.”

While the season may have ended, this team has made memories that each player will remember for a lifetime. Special bonds have been created and this team has come together as a family.

“We always called ourselves a family and broke out of the huddle many times with that,” Tebbe said. “Being part of the football family was a focus for us back at the start of the season and I believe that was a big part of our season’s success.”

While this season was notable for the on-field production, it was thanks to much of the off-field work by the coaching staff and managers that made this season what it was. Varsity manager Symone Henderson has been assisting this team for four years and has been an essential assistant to head coach Brian Glashagel in the process. Now as her time as manager is up, she is excited for the future of this program.

“It’s my turn to leave and it’s such a bittersweet feeling,” Henderson said. “I know that next year’s team will be just as successful, if not more. The underclassmen, in my opinion, have some of the best older role models possible.”

The future is indeed bright for the Antioch football program. Despite the astonishing success of this senior class, who finishes with a record of 30-3 that spans their time at Antioch, the next generation of Sequoits already has many eyes on them. Key figures such as sophomore A. Kaliakmanis, junior TreShawn Watson and junior Brandon Reynolds are all returning next year, along with countless other players who will be taking over important roles in this team.

“The thing this program does well is coach everyone,” Tebbe said. “They coach them when they are young so when their time comes, they can fill their roles.”

Despite the sadness that comes from the loss Saturday night, the future is bright for this Sequoit squad and another return to the quarterfinals isn’t just possible, but probable, knowing what this team has to offer.