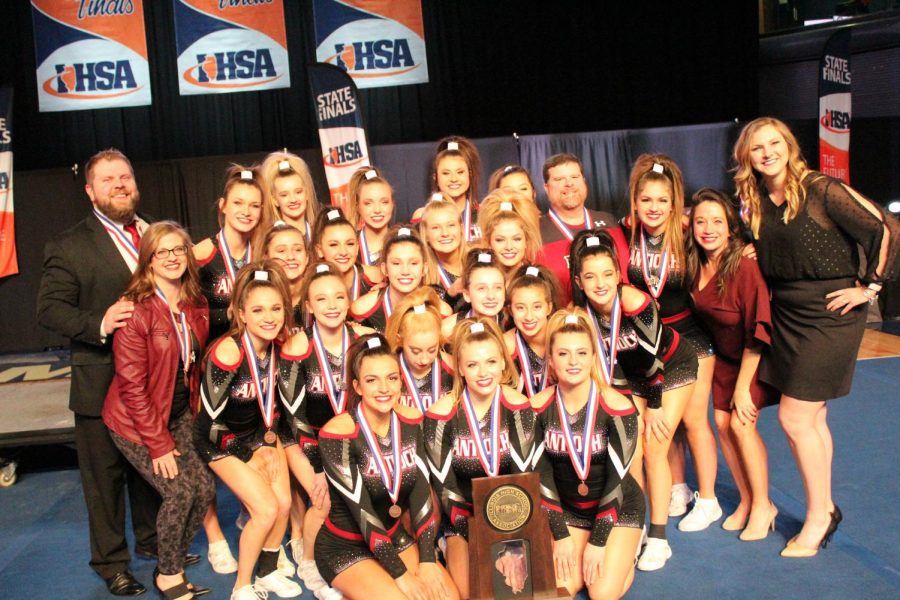 Flying high as an arrow, light as a feather, after placing third at day two of the Illinois High School Association competitive cheer finals, the legend of this year’s Sequoit cheer team will last forever.

“My senior year I wanted to go out with a bang and I think we did that,” senior varsity cheerleader Miranda Karellas said. “My goal was to make podium because I knew how talented this team was, and now that we were all able to accomplish this it was even better. I am so happy to end my cheer career with this team and making podium.”

Karellas, along with seniors Chloë Grass and Aubrey Kay are seasoned veterans attending State all four years as cheerleaders. They took the mat for their last time ever and were rewarded with the third place trophy to bring home.

The teamwork that Leineberg mentions is a key piece in the team’s success and one of Karellas’ favorite memories of her cheer career.

“To the cheerleaders next year, go into the season, work as hard as you can,” Karellas said. “Push yourself and your teammates, and work together as a team always, […] cherish every moment because when it’s over you never want to leave because of all the amazing memories and friendships you create. There is nothing you can ever compare to this.”