Common Myths That Most People Believe

It is time to debunk the misconceptions that everyone grew up with. 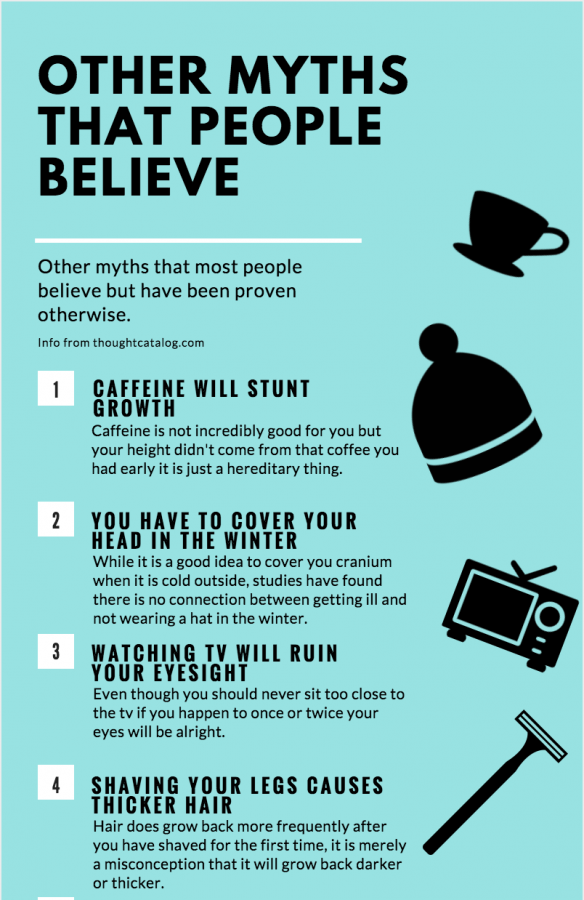 There are plenty of myths that people hear and believe everyday; which ones are actually false?

Chewing gum will stay in the body if one swallows it

Clearly it is not good to swallow something that was not meant to be food in the first place, however one will not have to worry about it floating around in their stomach for the next seven years either. Over the years, the body has grows and adapts to digesting a multitude of things which is why the acid in the stomach is so strong. So, there is no need to freak out about how long gum will stay in the stomach.

This myth actually stemmed from World War II propaganda when the British army claimed that their great vision was due to the large amount of carrots that they had eaten. However, this was just to distract their enemies from the fact that they were watching them with the radar sensors in the airplanes. So, it looks like all of those carrots that parents forced their children to eat when they were younger was all for nothing.

Swimming right after one eats can be dangerous

Adults were constantly telling their children that if they wanted to eat at the pool, then they would have to wait around for 30 minutes before getting back in. However, this is completely untrue and there is no correlation found between eating and getting cramps if a person gets back into the pool too soon. A person should not exert themselves too quickly because it’s not like someone would go to the gym after eating a big meal, right?

Sugar causes children to be hyperactive

All the time in movies there are crazy kids literally jumping off the walls from having too much candy or even just sugar, because it makes sense that something like sugar would cause a large boost in energy. However, the way that sugar travels through the bloodstream is that it goes to all of the organs and than stores the rest for later. There is no boost of energy when sugar goes through the body, those kids are most likely just being naturally hyperactive children.

Cracking your knuckles will cause arthritis in the future

This myth comes from the noise that is created when you crack your knuckles. Many believe that it is the sound of your bones literally rubbing together, but in reality it is just air pockets within the joints that are being released when you bend your fingers in a certain way or direction. However, cracking your fingers can lead to other issues like ligament damage or loss of flexibility in your hands and fingers.