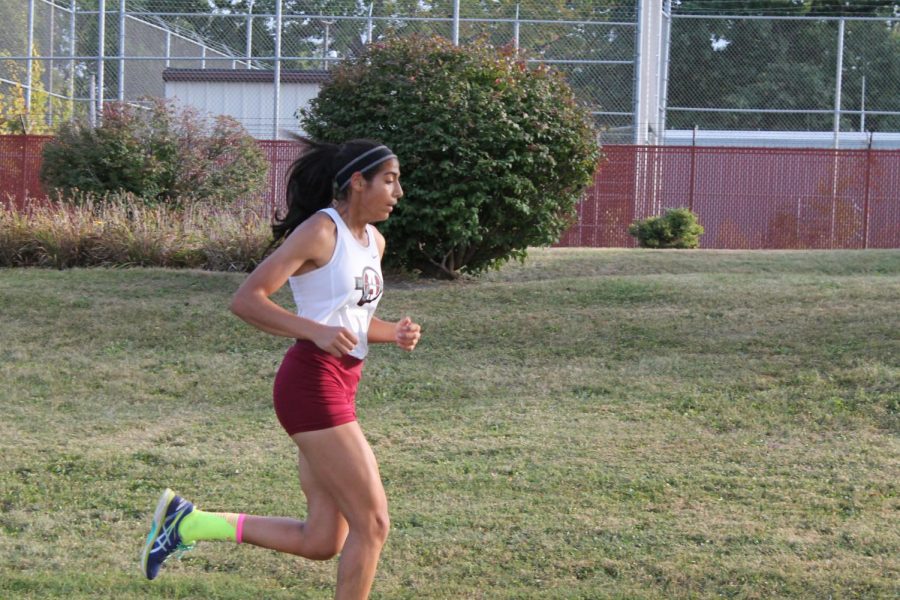 Noor Abdellatif continues to push herself in order to get ahead of the rest of the pack.

August 29 marked the beginning of a new season for the Antioch cross country team. The boys had a comfortable 21-38 win against Richmond Burton, whereas the girls team competed hard but ultimately ended up falling 26-29 in a closely contested race.

“I was very proud of how everyone competed,” varsity head coach Christopher Bailey said. “Emotions were high for most of the athletes, but they overcame that and competed their best.”

This was the first meet since the tragic passing of cross country coach John Lapointe the week prior. Many of the athletes could be seen comforting each other before and after the race but, sometimes tragic events like these can bring a team closer together.

“We ran together as a team for most of the race, which is rare,” junior Charlie Smith said. “It brought us closer than ever had been before.”

Coach Bailey, who was very close and good friends with coach Lapointe, agreed this tragic event has strengthened the relationships of teammates.

“I see more kids now than ever before hugging each other and telling each other how much they mean to each other,” Bailey said. “Sometimes tragic events like these can inspire a team to run their hardest every time they step foot onto the course.”

Besides the mental and emotional hardships of running this race, there were also physical hardships. The race was ran through a muddy corn field which only added to the battle the Sequoits were trying to overcome.

“The terrain was muddy, slippery and difficult,” Smith said. “The farther you run the more the mud sticks to your feet and it weighs you down.”

Even with all of this, Charlie Smith finished first in the race with a total time of 18:03 over the course of three miles.

Though the girls were defeated, they still hope to work hard and improve to emerge victorious later in the season.

The boys cross country team still came out on top even with all the odds seemingly stacked against them and the girls hope for an improvement for their first and definitely not last victory of the year.