In an attempt to spite market short sellers, Reddit users reportedly inflated stocks of GameStop Corporation to 20 times their prices of just last week. Throughout the ordeal, many are left unsure of what exactly has happened and what short selling even is. 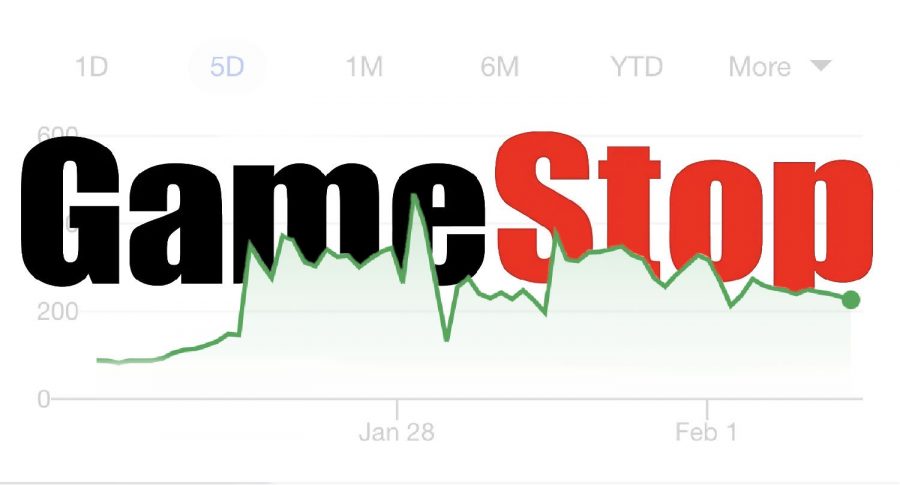 Due to extreme changes in share prices, stock in GameStop Corp. has become extremely volotile, with the company experiencing changes upwards of $100 per day.

Beginning on Monday, Jan. 25, stock prices of GameStop soared from around $17 per share early this year to a peak of $159.18. Later in the week, this price continued to rise, topping out at $483 on Jan. 28. Many were unsure of the exact cause of the volatility at first — as GameStop has been considered a dying company due to popular online alternatives such as Steam — but it has since been attributed to users on the Reddit forum WallStreetBets buying extremely high numbers of shares.

According to The Motley Fool, this frenzy was an effort to cause massive losses for numerous short sellers. Short selling is a practice usually performed by investors when they expect a stock’s price to decrease in the future. An investor will borrow a stock from a brokerage, meaning they do not own it and need to return it. The investor will then sell the stock at market value. At this point, the investor does not own any stock, as they will eventually need to return the borrowed shares. Using the money they received from their sale, investors will buy back the stock. This is why they hope the stock price will go down; once the price drops, they buy back the same amount of shares from the market and return it to the brokerage. Since the price went down, it costs less money to buy back the stock, meaning that the investor has leftover cash. Now, the brokerage has all their stock back and the investor has made a profit.

In the case of GameStop, many individual investors decided to sabotage short sellers, causing the price of the stock to increase by more than 1900 percent since the beginning of the year, according to Fox Business as of Jan. 29. Since the share price must go down in order for short selling to be successful, large numbers of individual investors began to buy stock in the company, thereby creating an extreme spike in price.

This higher price means that short sellers are forced to buy back their borrowed stock for far more than they had sold them for. For many large investors, this equates to millions of dollars in losses. As of Jan. 29, CNBC reports that short sellers have lost a collective $20 billion in GameStop alone since the beginning of 2021.

Stocks in a few other companies have recently followed suit, such as AMC, BlackBerry and Nokia, but not nearly to the same extent.

In response to the volatility of the markets, online brokers such as Robinhood have restricted trade on not only GameStop, but numerous others as well, including BlackBerry, Tootsie Roll, AMC, Bed, Bath & Beyond, among others. In certain instances, Robinhood sold users’ stocks unexpectedly, even in instances where the current price was lower than what the user had initially bought them for, which caused many to lose money.

This resulted in an uproar from the public, with some going so far as to claim Robinhood was manipulating the free market; though, others claim just the opposite: individuals investing large numbers is market manipulation. Antioch Community High School graduate Ty McGuire is involved in day trading and opposed to Robinhood’s restrictions.

“I find it extremely disappointing that although Robinhood states that they have the average retail investor’s interest at heart, they decide to instead censor our trades and prioritize their clientele with larger pockets,” McGuire said. “I believe censorship of all types lacks sustainability and is detrimental to our nation.”

Numerous class action lawsuits have been filed against Robinhood and other brokerage companies and are awaiting further investigation on the legality of preventing users from trading. According to Business Wire, Rosen Law Firm announced their investigation of Robinhood, LLC on the basis of market manipulation claims.