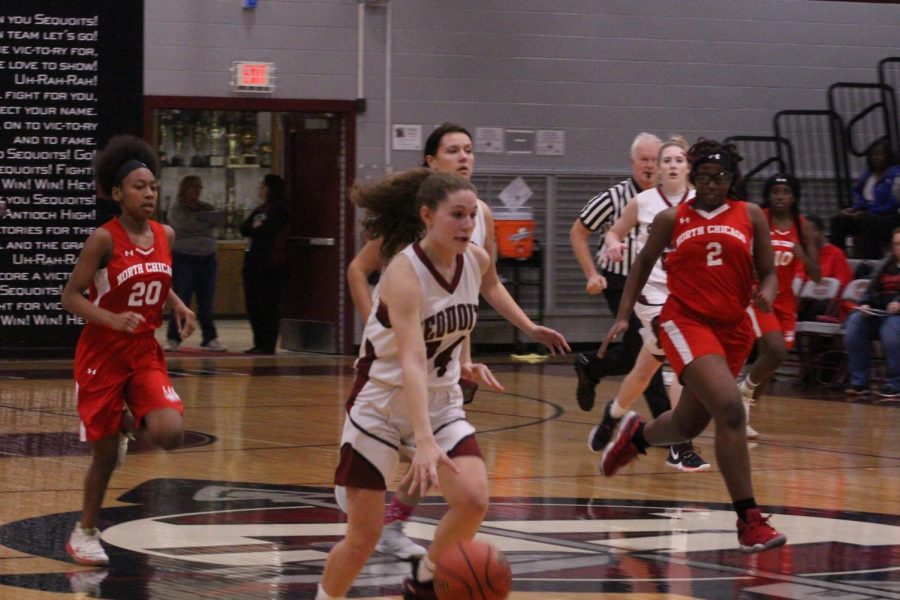 Junior Gianna Rifrogiato going in for a layup on a fast break in their previous win against North Chicago.

The girls basketball team took on North Chicago in an away game on Saturday. The Sequoits came out with a 47-36 win and they are now 10-12 on the season, but are still looking for more. Going into the game, the team had a set of goals they wanted to achieve together.

“Our goal was to play together as a team and move the ball around a lot without standing and watching,” junior guard Erin Miller said. “We accomplished that in the second half, but not the first.”

“As a team, we wanted to go out strong and start off the game with energy,” junior forward Jada-Ashley Shaputis said. “We also had to bring in the same defense and offense we had been working on in practice.”

Even though the team came out with a win, they still have to learn from this game to get better.

“We can get better by driving to the basket more and making more ball fakes,” Miller said. “We plan on working more cohesively and doing what we did in that game by playing great defense and communicating with each other more.”

The team gained momentum and confidence from this game that they plan to use going forward. They are working hard to end the season on a high note and get some more wins.

“We plan on bringing momentum from this game to the rest of the season because our ball movement was the best it’s been,” junior guard Allyson Pierce said. “We are starting each game stronger and stronger.”

This game was successful for the Sequoits and the team is excited to continue playing. Their next two games are January 29 against Grant at home and February 1 against Grayslake North.