After a long year of COVID and it's virtual competitions, this is how our Antioch Cheer team is now adjusting to in-person competitions. 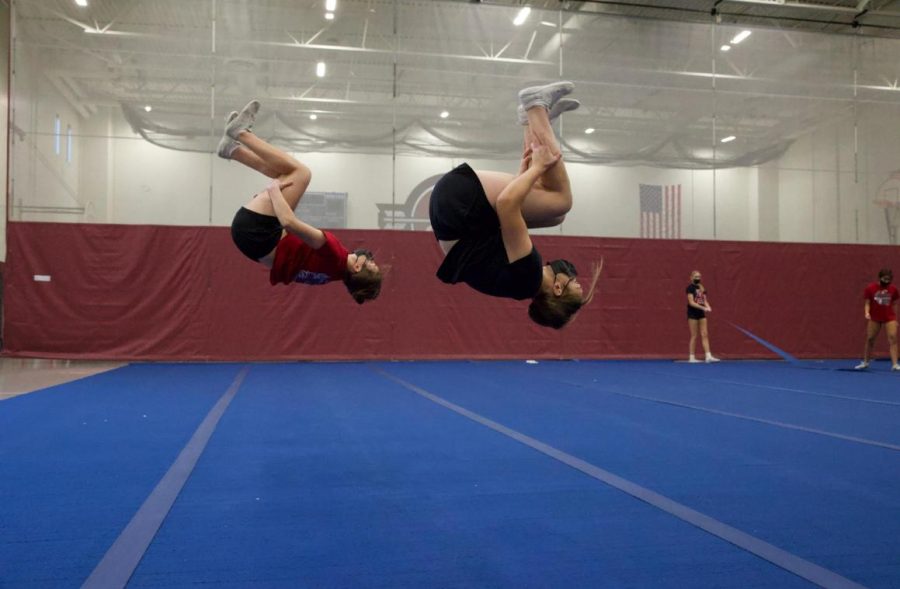 Freshman Elle Lubke and freshman Maddy Clancy warming up their back tucks.

As most of the fall and winter sports and activities are returning to some sort of normalcy, the Antioch cheer team is finally returning to regular, in-person competitions after a long year of recorded competitions due to COVID-19.

Competitions during the 2021 season were recorded in the auxiliary gym where the athletes had to wear masks and were not allowed to stunt. Due to these restrictions, the team had lost the excitement and experience of performing in front of an audience.

“If you know anything about cheerleading, it’s that we get people loud and excited,” junior Emma Kolloff said. “Without that, it felt different because there was no extra noise of people getting you pumped up.”

During a regular competition season, teams were able to watch other performances. This allowed teams to see who they were competing against and prepare themselves for their performance.

“We have to look out for a lot of teams this season because we don’t know where everyone is at, mainly with stunting because we haven’t competed [in person] in about two years,” Kolloff said.

Since competitions were so different last season, the team is adjusting back into the excitement and adrenaline of performing in front of a crowd again.

“Being a performance-based sport made it difficult to not be able to compete in front of a crowd,” varsity coach Amber Babin said.

During these competitions, teams were able to re-record the routines and fix any mistakes.

The Antioch cheer team won state in 2020 and is working hard to claim their state-champion title back.

“I am so excited for the competition season to be normal again,” Kolloff said. “There is no better feeling than that adrenaline rush before competing.”