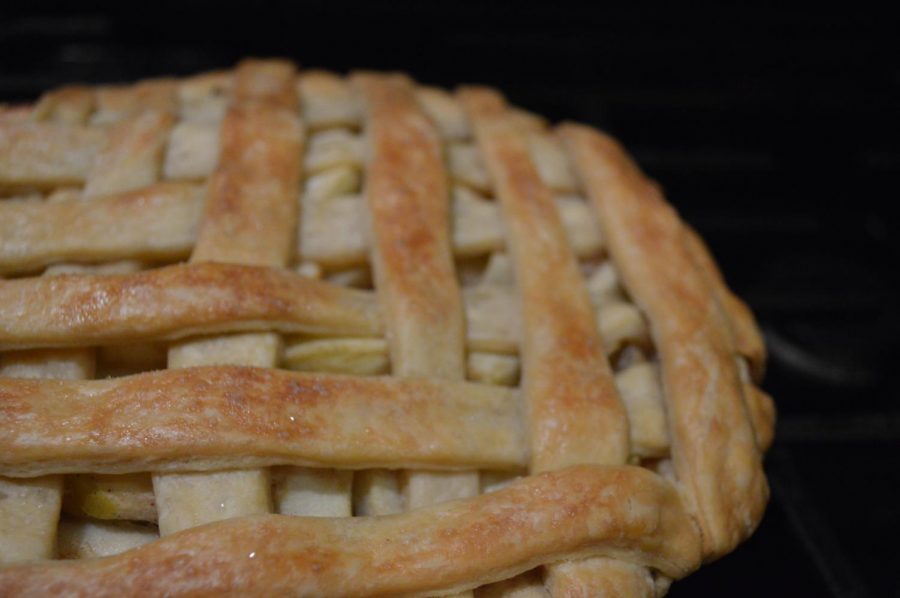 How to: Bake an Apple Pie

During the holidays there are many desserts that can be made to celebrate. Here’s how to make one of the classics

The recipe to make apple pie may sound complex, but when executed the right way, it can end up as the perfect fall dessert. This recipe packs the dessert with cinnamon, nutmeg and apple cider flavor providing an excellent end to a night.

2 and a half cups of flour

Start by stirring the salt and flour together.

Then, gently blend the shortening into the flour mixture with your hands until the mixture is crumbly and chunky.

Once completed, set this mixture aside. In a separate bowl, beat the egg and cold water together then add the apple cider vinegar.

Pour the liquid mixture into the flour mixture and lightly fold them together. Let them sit for a few minutes to let the water absorb.

Using your hands again, mix until a dough forms. If it is too crumbly to become adhesive add an additional one to three tablespoons of cold water. As mixing be careful to not overmix as over working pie crusts makes it tough and the dough will become sticky.

Remove the dough from the bowl then score the dough down the middle with the edge of your hand and pull it apart into two pieces.

Shape them into two round discs, wrap them in plastic wrap, and then chill them for one hour in the refrigerator.

While the dough is sitting it is the perfect time to begin making the pie filling.

In a heavy saucepan, whisk together the cinnamon, nutmeg and cornstarch. Stir in the apple cider and lemon juice. Cook on medium heat until thick and bubbly.

Scoop the sauce into a bowl and let it sit in the refrigerator.

A pinch of sugar

To make the bottom pie crust:

Take one of the cooled pie crusts halves out of the fridge.

On a floured surface, roll the dough from the center out into a circle until about three-eighths of an inch thick. Make sure the dough is about one to one and a half inches larger than the pie pan all the way around. When finished rolling it out, carefully fold the dough in half. In fourths, pick it up and transfer it to your pie pan. Press the dough into the pan to remove any air pockets. Put the bottom crust in the freezer for 10-15 minutes to get it cold again.

Pour the apple filling into the bottom pie crust. Carefully move apple slices around until all the sides are filled and the top is even, without any apples sticking up which would protrude through the crust. Put it back in the refrigerator while you roll out the other dough disk.

Bake at 400 degrees for 20 minutes, then (leaving the pie in the oven) reduce the heat to 350 degrees and bake for another 30-40 minutes until the crust is golden brown.

After letting the pie cool, this dessert is ready to enjoy. Top with vanilla ice cream to mix up the flavorings.