How To: Play Two-Touch 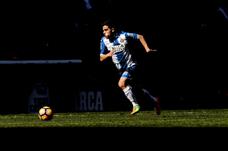 Two-touch soccer is game that is typically a leisure activity, and has become increasingly popular.

What you need: a soccer ball, goal and a couple of friends.

Basic rules: The game is usually played with three or more people and one person starts as the goalie and the other players stand outside the goal. In order to score, a player must kick the ball out of mid-air into the goal. Any player can kick the ball into the air to set up another teammate. Each player gets no more than two touches on the ball and if the ball bounces twice after striking it, that player is now in the goal. If a player lofts the ball in the air and the goalie catches it, they can throw the ball off another player and make them the goalie.

End Game: Depending on preference, typically the player who allows the most goals as goalie loses and those who allow the least are the winners.

Varsity soccer player Gabriel Tijerina often plays two-touch to stay sharp wth his skills but spend time with his friends.“I like two-touch because I can expand my skill level off the volley and also with headers, but still have fun with the game of soccer,” Tijerina said.