After Maine became the first state to adopt ranked-choice voting in September, the electoral system has been put in the spotlight; however, many are unaware of what this new ballot system is and how it works. 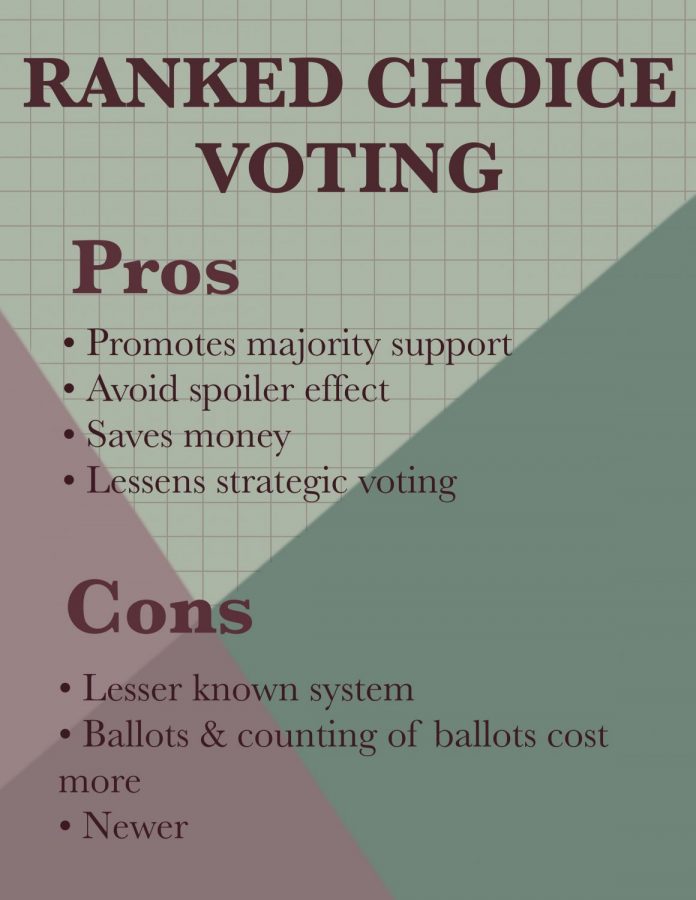 Since ranked choice voting is a new system, it is important for voters to learn of its benefits and disadvantages. It is quite new, so the general public might find it to be inconvenient to switch systems. However, one advantage is that ranked choice voting promotes the majority support.

On September 22, the Maine Supreme Judicial Court overturned a decision made by the Superior Court that a people’s veto — a vote wherein the people decide whether a law should be repealed, which would also intentionally delay ranked-choice voting — would be held on November 3, according to the Maine State House. The decision would have allowed Maine to serve as the first U.S. state to utilize ranked-choice voting for a presidential election. With the recent attention of this new ballot style, many Americans were left curious as to what exactly ranked-choice voting entails.

Ranked-choice voting, according to Ballotpedia, is a ballot wherein voters rank the candidates in order of preference. If any candidate receives a majority of first-place votes (more than 50 percent), they are declared the winner. If there is no majority, the candidate with the fewest votes is eliminated. In a situation where a voter ranks said failed candidate as first, that voter’s second-choice becomes their first-choice and the ballots are tallied again. This process is repeated until a candidate has a majority vote and becomes the winner.

“Yes, I do think [ranked-choice voting] would result in a higher voter turnout,” senior Brianna Gilmore said. “The people who don’t vote tend to say that their vote ‘doesn’t matter’, and with this different style of voting, your voice will be heard no matter what.”

One benefit often identified with ranked-choice voting is that it could allow voters to choose who they actually prefer by diminishing the spoiler effect, according to The Center for Election Science. The center further explained that the spoiler effect is the idea that if one party, A, has two candidates with similar ideologies and the opposing party, B, has only one main candidate, the votes will be split between the candidates of party A, causing party B’s candidate to win. This often led to voters not actually voting for their first choice, in order to prevent the votes from being split between multiple candidates. Ranked-choice voting could negate the spoiler effect by allowing voters to choose their favorite candidate; if they do not win, their vote would carry over to their second choice.

Though it initially seems as though ranked-choice voting eliminates the spoiler effect, The Center for Election Science continued to explain why this is not always the case. In a situation where a first-choice candidate is not either very strong or bound to lose, casting a vote for this candidate could actually lead to the last-choice candidate becoming the winner.

“I have not done much research about [ranked-choice voting], so I am not quite sure if Illinois and other states should follow,” Craig said.

Craig, along with other new and current voters, may not be fully aware of the exact workings of ranked-choice voting. With this ballot style, all voters would have to become educated on a new system. The Boston Globe described how some voters and candidates opposed ranked-choice voting by arguing that it is too confusing, would require voter education and stating that each voter deserves just one vote. Though ranked-choice voting is liked by many, these reasons highlight why it may not spread as widely throughout the country as some may hope.