The Lakers hockey team finds a way to work together, despite being from different schools. 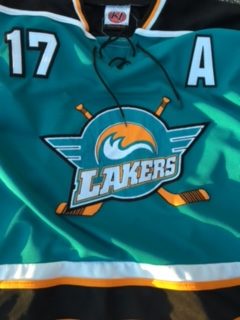 The Lakers jersey for away games.

Unlike any other team at the school, the Lakers hockey team combines with five schools, Antioch, Lakes, Grant, Grayslake Central, and Grayslake North. With all these rival schools playing on the same hockey team, it should be tough for the players to get along, however the Lakers make it possible by working together.

“We do fight about football and basketball games about which team is better, but nothing big,” Antioch senior Warren Sundt said. “We also do team bonding exercises and other drills before and during the season that involves teamwork and for us to become closer as a team.”

The team likes to joke around about which has all around better sports, but that is how they become closer with each other.The heated rivalry between the schools does not affect the way the players get along and play. They are one team; all brothers working together to be the best.

Another player from Lakes Community High School, junior Sean Delaney, agrees that the team has no issues getting along, and actually really likes that different schools combine to make one great team.

“We are just having fun playing hockey, I have never disliked anyone on the team. They are a great group of guys,” Delaney said.

The rivalry does not affect any of the players. They come out to play hockey with their brothers and for their love of the sport.

The Lakers are 1-2-1, their next game is November 16 against Warren High School, at Rinkside Ice Arena in Gurnee.