The wildfires on the West Coast have reignited conversation surrounding the Green New Deal, a climate proposal introduced in 2019. 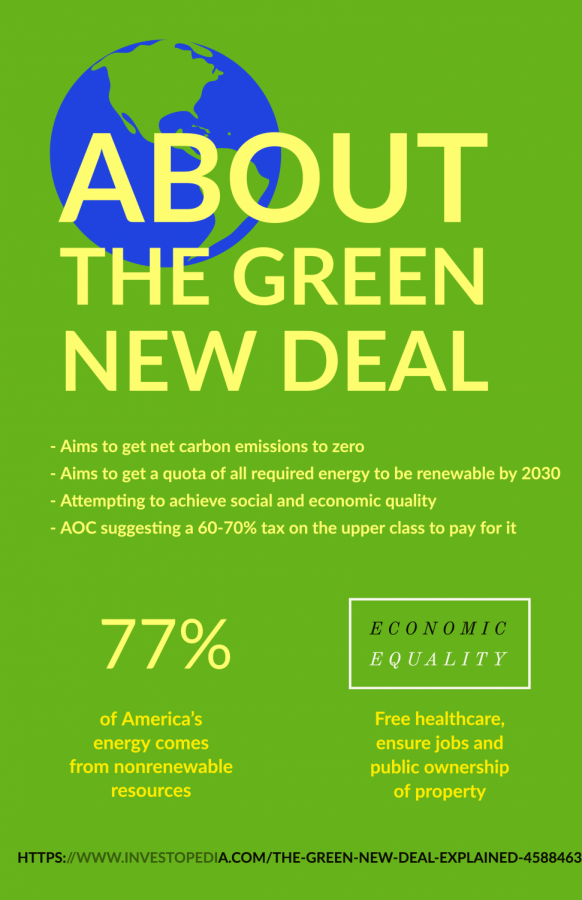 According to CNN, as of September 13, 2020, 94 wildfires are burning throughout the West Coast. 4.6 million acres of land have been destroyed, specifically in forested and rural areas; however, cities such as Los Angeles, Calif. and Portland, Ore. are impacted to an extreme extent due to the poor quality of air.

Environmental Club advisor and social studies teacher Stephen Rose believes that the wildfires’ impact could be reduced if people were more careful with the environment.

“We’re cutting down a lot of trees, and we are moving into areas that have historically been more pristine wildlife,” Rose said. “As we do that, we get rid of some of the natural barriers that hold things like wildfires in check.”

Throughout the wildfires, some public officials agree with Rose that human activity has increased the severity of the fires. Some argue that climate change, or the long-term shift in global and regional climate patterns, is creating and worsening wildfires.

According to AP News, Governor Newsom of California (D) is arguing that climate change is currently affecting his state and that the data and experience Californians are living through demonstrates the need to face climate change head-on.

Other politicians agree with Newsom, such as Representative Alexandria Ocasio-Cortez (D) and Senator Ed Markey (D), and want to fight climate change. As a result, in February 2019, Ocasio-Cortez and Markey proposed the Green New Deal.

“My understanding [of the Green New Deal] is that the goals are for zero net greenhouse emissions, job infrastructure, economic security and equality,” Rose said.

According to The Hill, the deal was brought to and rejected by the Senate in March 2019 with several Senate members such as Senate Majority Leader Mitch McConnell (R) arguing that the deal was too expensive and undeveloped; however, due to the recent wildfires, some people on social media such as Senator Bernie Sanders (D) and Representative Ilhan Omar (D) are starting to discuss the Green New Deal again, claiming that it could be a solution. One group, the Sunrise Movement, believes that the deal should be utilized during these significant times.

The Sunrise Movement said on Twitter that Democratic Vice-Presidential candidate Kamala Harris and Democratic Presidential Candidate Joe Biden should do more and say more about the fires and that a Green New Deal will help with stopping future wildfires from being so frequent and destructive.

Some believe that the Green New Deal is a solution for climate change and the wildfires. Rose agrees, but also thinks that society needs to commit to taking steps towards making it happen.

“As a human society, we are reactionary; we have this discussion about what we can do, and then we don’t bother doing anything about it,” Rose said. “However, I think it’s something that we definitely need to work towards.”