The Town Hall debate in St. Louis, MO had no problem causing more controversy in the current election season 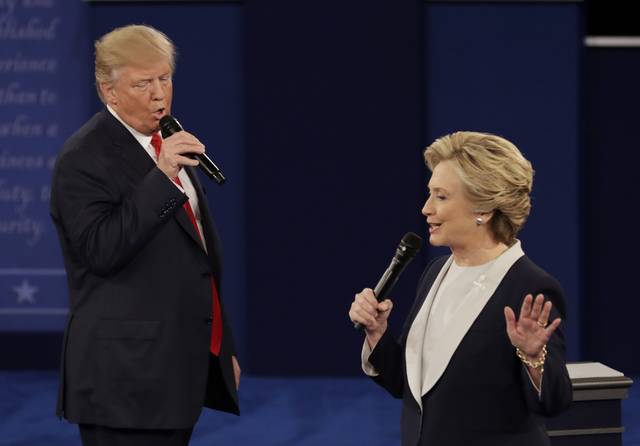 A snubbed handshake between the two candidates set the tone for a debate which would see countless interruptions and negative comments. With such a large divide between the two parties, this race looks like it is going to go down to the wire on November 8th.

Millions of Americans tuned in on Sunday, October 9 to see Republican Nominee Donald Trump take on Democratic Nominee Hillary Clinton in the Town Hall Debate at Washington University. Many came into the debate with a belief that the Republican Party was falling apart due to a recent leak from a 2005 video of Donald Trump saying skeptical comments about women. Although he dismissed this as “locker room talk”, many people were outraged, including  high profile Republicans like current Speaker of The House of Representatives, Paul Ryan.

Clinton sought out to use this tape as an attack against Trump during the debate, and pursued it as a topic for most of the hour and a half discussion. Trump, however, held a press conference with women who have accused Bill Clinton of rape as a way to counter Clinton, inviting them as his guests to the debate.

“I think actions speak louder than words,” freshman Adam Lynn said. “The Clinton’s have committed actual crimes and they should be punished, not elected.”

Another major talking point of the debate was Clinton’s recent scandal over the release of 33,000 deleted emails, some of which contained classified information. The Democratic nominee is accused of knowingly deleting these emails from a private ate server, putting a damper in her honesty as a candidate. Clinton’s counter to this wrongdoing was the accusation that Donald Trump has not paid federal income tax in over 20 years.

“It’s really difficult to pick [a candidate] right now,” said Senior Jake Emer. “The decision Americans are going to have to make is the one between a man who says crazy things or a woman who does crazy things, and it isn’t an easy one.

Although it is questioned as to who won the second Presidential Debate of 2016, a CNN poll reported a 57-34 percent victory for Clinton whereas in pollster, Frank Luntz’s focus group, 16 of the 30 people questioned declared Trump the winner, compared with Clinton’s 6 with 8 undecided.