Superfan "Candy Man" Steve is awarded for his 76 years of ACHS school spirit at the first home game of the season. 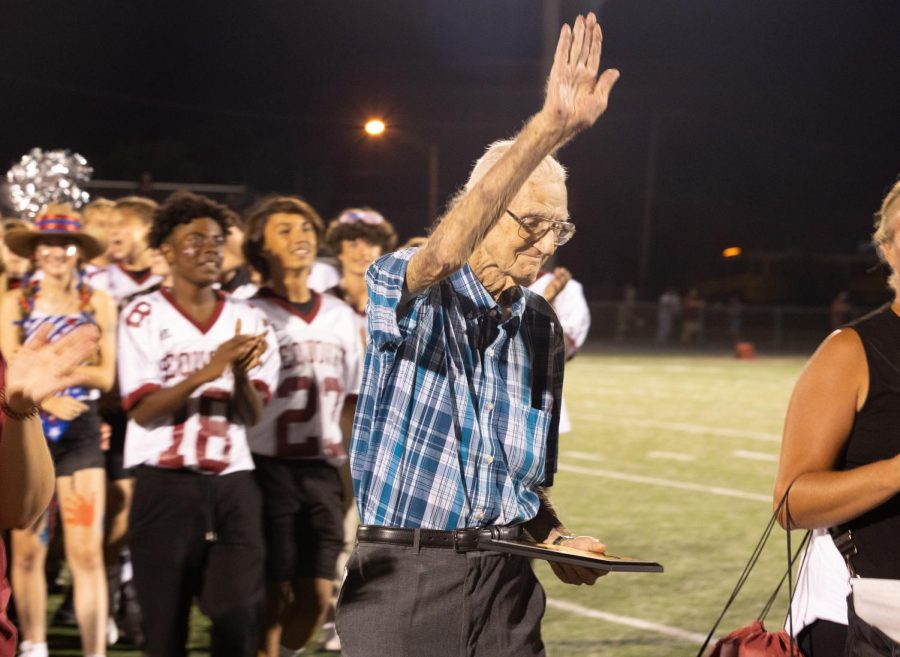 Superfan Steve Young is going on his 76th year supporting the Sequoits. Not only has he supported Antioch Community High School for that long, but he has touched the lives of many athletes and coaches from his presence alone. From football to softball, Young has attended an unmatched number of ACHS sporting events.

“Last year, he went to all of our home games. He even came out to state to see us play,” senior Syerra Gilmore said.

In the past 76 years, Young has not missed a Friday night football game except during his active years of service in the Korean War. Passionate, dedicated, supportive: all words to describe Young and his attitude towards his community. No one has come nearly as close to being as much of a superfan as Young.

“I feel like we all perform better when he is there, just because he comes out and does a good job supporting us and cheering us on,” Gilmore said.

Not only is Young the ACHS superfan, but he will forever leave a lasting legacy on Antioch’s athletes. Throughout different sports, Young is commonly referred to as the “Candy Man.” At events, he passes out Bullseye Caramels or Werther’s Original caramel candies to athletes as a pregame treat.

“When we first get to a game he gives us all a candy,” Gilmore said.

Not only does he do this before games; athletes know that if you make a great play or do something to help your team, Young will be waiting on the sideline to hand you a “great job” caramel.

“I think it is definitely encouraging. Especially when you do a good thing on the team, we all remember to go get our candies. So when we do something, it is encouraging to get the extra ‘good job,'” Gilmore said. “He inspires me to do good for my community like he does.”

Besides leaving a legacy, Young continues to be a role model for people in our community.

This past Friday, Young received the “Sequoit Superfan” award. After his constant support since 1946, Sequoit Pride recognized him for always being a staple on the sideline.

“I think he deserves this award because he shows up at all the games, and there is nobody else who shows their support like he does,” Gilmore said. “He’s at every single game, and goes above and beyond to congratulate us.”

Young will be honored as the Grand Marshal for the 2022 homecoming parade and featured on CBS On the Road with Steve Hartman on Friday, Sept. 30. at 5:30 p.m.

Read more about Young’s life in an interview conducted in 2014 by ACHS alumna and Tom Tom staffer Arlenne Lozano.