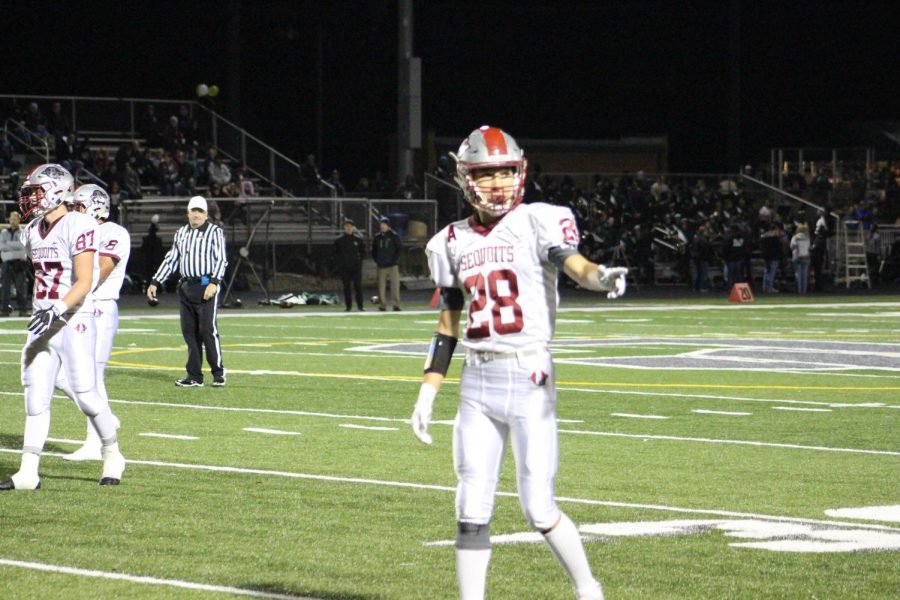 The boys varsity football team traveled to Grayslake Central to compete against the Rams on Friday, September 28. Having an undefeated season, the boys were looking to continue the momentum and ultimately come out on top like they have the last five weeks.

In the first quarter, the Sequoits started off strong with a touchdown from sophomore Gavin Calabrese. He was able to squeeze past the defense of Grayslake Central and make it to the end zone for the first touchdown of the night. Keeping the momentum going, the Sequoits scored three more touchdowns from sophomore Athan Kaliakmanis, junior TreShawn Watson and senior Nick Wiley, making the score 28-0 with three quarters left in the game.

“They completely dominated the first half of the game,” manager Avery Malicki said. “They started off strong and continued to play that way instead of just giving up and not trying.”

In the second quarter, the Sequoits wasted no time keeping their position. The defense worked together and made the job for the offense much easier. Sophomore Dino Kaliakmanis scored a touchdown early in the quarter moving the Sequoits to 35-0. Later Wiley scored yet another two touchdowns making the score 49-0 with 2:50 left until halftime.

In the second half of the game, the Sequoits began to switch things up in their lineup. That decision resulted in junior Kyle Bukowy scoring his first varsity touchdown of the season and helped move the Sequoits to 55-0.

Ending the game, the Sequoits shutout the Rams of Grayslake Central and continued their undefeated season moving to 6-0. This record qualified them for the IHSA playoffs with three more regular season games left.

“It’s very exciting to know they qualified for the playoffs,” Malicki said. “They have really worked hard and have a lot of talent [and] potential. Hopefully, when it comes time for playoffs, they get the result they’ve worked for.”

Come supports the boys as they travel to Round Lake High School to compete against the Panthers in week seven of their season on Friday, October 5.