On Tuesday, Jan. 11, the Sequoits dominated the Warhawks with a score of 59-9 beating the Warhawks by a 50 point difference. 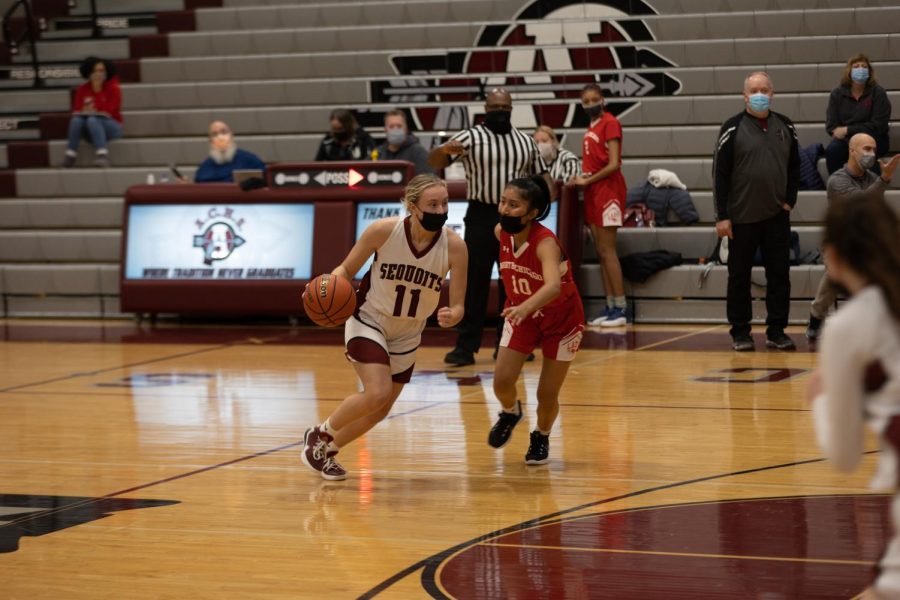 Junior Callie Bemis dribbles the ball down the lane towards the hoop.

On Tuesday, Jan 11, the girls varsity basketball team took on the North Chicago Warhawks at home. The Sequoits played a great game and finished with a final score of 59-9 in favor of the Sequoits. They played well and that is what helped them get the win

“We did well on moving the ball and reversing it to get an open shot and towards the end, we had two or three three-pointers,” senior Avery Larson said.

The lady Sequoits put on a great show for the fans and showed that they have improved on many skills. They worked well together and played better defense compared to how they have played in the past.

“I think we performed really well, we worked together and we played really well together,” senior Maggie Volkmar said. “Our defense was really good today and we just played better defense in this game.”

Coaches would like their players to improve at certain things, not only trying to get better at these things in practice but also in games. During the game on Tuesday, night coach Tim Borries was telling his players what they needed to work on.

Overall, the team played a great game and was able to beat out North Chicago. The lady Sequoits’ next game is on Thursday, Jan 13. at 5:30 p.m. at Waukegan High School.