The Republican Debate that occurred on Tuesday, September 24th, offered some insight into other candidates besides Donald Trump. 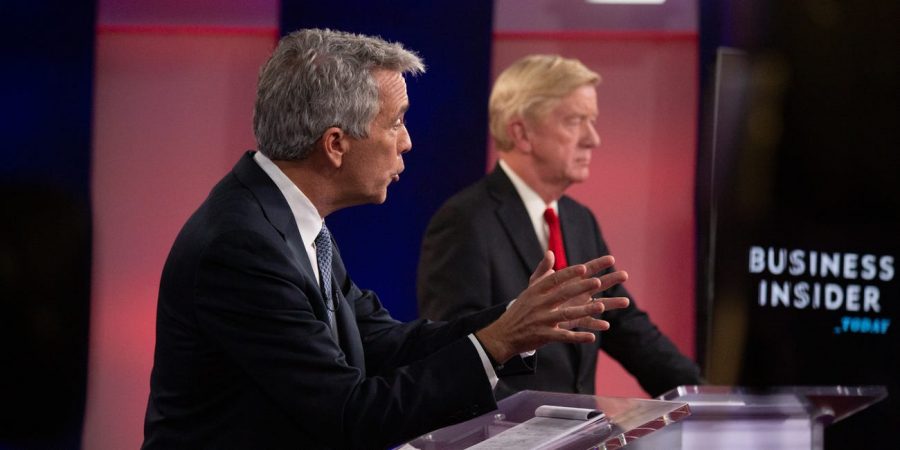 Pictured are candidates Joe Walsh and Bill Weld. In this image, Joe Walsh is talking about Donald Trump. "We've got to do better than a president who has zero respect for the rule of law," Walsh said.

Currently, there are 23 candidates who are running for President of the United States. However, only four of those individuals are Republicans: Mark Sanford, Joe Walsh, Bill Weld, and Donald Trump. The 19 Democratic candidates have already had three debates out of the 12 scheduled. Republicans who are running for president, however, have not had as much publicity. To combat this, Business Insider held a Republican Debate on Tuesday, September 24. Only Walsh and Weld, two of the four candidates, attended.

“Weld and Walsh will make the case for their candidacies and discuss the future of the GOP,” Grace Panetta of Business Insider wrote.

“This is the issue that concerns most young Americans,” Walsh said. “The Republican Party had better get on board or we’re done.”

Weld also explained his ideas for reducing climate change and carbon emissions. He described himself as an environmentalist.

“Putting a price on carbon will allow the market to lower the amount of carbon in the atmosphere,” Weld said.

Even though the debate could help to spread awareness about other candidates and their political beliefs, students at Antioch Community High School are uncertain if it will impact the likelihood of anyone defeating Trump at the Republican primaries.

“As a Republican who doesn’t support Trump, it’s cool to see, but nobody is going to beat Trump,” freshman Braxton Schieler said. “It will probably garner more support for other candidates, though.”

However, others believe that there is a possibility that the debate could impact voters’ decisions. When responding to a school-wide survey, sophomore Jordan Mitchell predicted that the debate would spread awareness.

“I’m going to guess that it will be impactful, whether Trump wins or not,” Mitchell said. “There are many people who have strong feelings about him, whether they be positive or negative.”

Whether the debate affects the election or not, the opportunity for other candidates to speak their minds about current issues may show American Republicans that they have more options when it is time to vote on Election Day.