The Price of a Guard

James Harden had the opportunity to sign the largest one year deal in NBA history from the Houston Rockets, and turned it down while demanding being traded to the Brooklyn Nets. 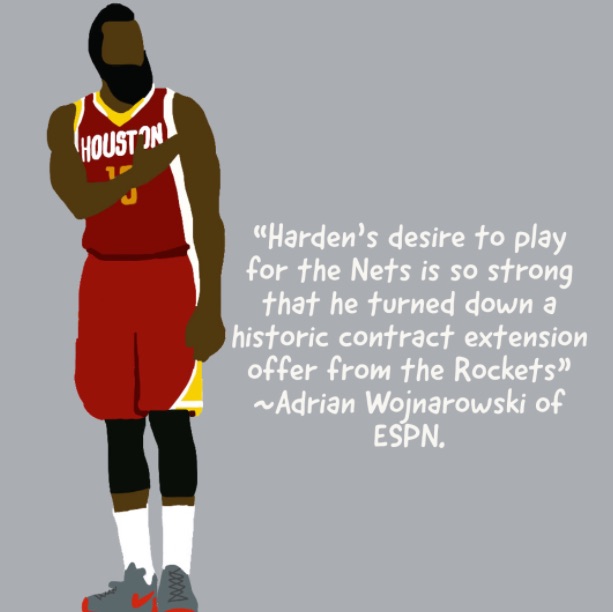 As the short offseason kicked off for the NBA, many players have been traded from team to team. Other players have been fortunate enough to continue with their current team and sign-extended contracts throughout free agency.

One player, in particular, has had an opportunity to sign the largest contract in NBA history. The contract is worth 50 million dollars per year. That player being Houston Rockets guard, James Harden, NBA sources have said that Harden is demanding a trade to the Brooklyn Nets.

“I feel like he should just take the $50 million that was guaranteed,” junior Tegan Martinez said. “I do not think the Nets can offer him that amount of money and I still think the Rockets can compete in the western conference.”

Many people are asking if playing in Houston is refraining him from his full potential.

“Since the Rockets former head coach, Mike D’antoni, isn’t coaching there anymore, I think he won’t be able to play to his full potential,” sophomore Jake Mallek said. “He may not have the same amount of freedom with a new coach.”

With the Rockets signing Stephen Silas as their new head coach for the upcoming season, some players have also been interested in requesting trades with other teams. However, the Nets no longer seem to be interested in negotiating for Harden per NBA sources. Nets Ggneralanager, Sean Marks says he is solely focussed on adding pieces to surround Kevin Durant and Kyrie Irving.

“I think that if the Nets do end up signing Harden he will help them out offensively because he can shoot from almost anywhere on the floor,” sophomore Luis Zamudio said.

On the flip side, some people may argue that the Nets may struggle to implement Harden into their offense because their offense already consists of two of the league’s top scorers. If they attempt to add a third one, the three stars may not shine as bright.

All in all, as Harden turned down the largest one-year deal in NBA history, things are surely going to get crazy this offseason.