The Quest for a Three-Peat Begins 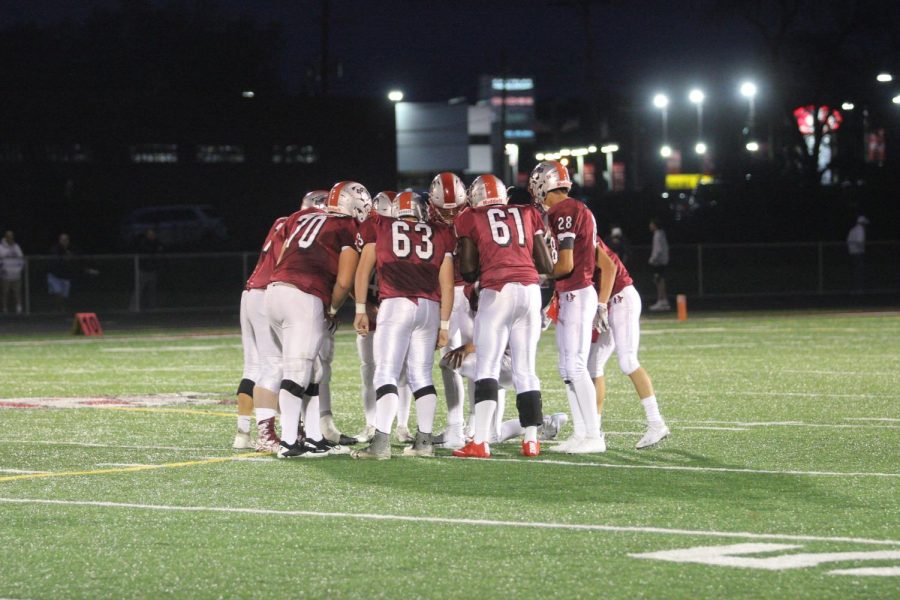 Antioch plans out their next move in the huddle.

Down 14-0 midway through the second quarter, three turnovers in the first half, it was not looking good for the back-to-back NLCC champs. That was, however, until the momentum shifted. After a rushing touchdown with under five minutes to go, Antioch was back in the game. After an incredible pick-six by senior middle linebacker Nicolas Fier, the Sequoits were only down by one point at the half.

“We had some first game jitters out,” senior wide receiver Zachary Grindley said. “We really came out fired up after halftime, we really wanted that win.”

After sophomore quarterback Athan Kaliakmanis outpaced the Lake Forest defense to take the lead 20-14, they never looked back.

“Our defense kept us in the game which helps the offense out a lot,” Grindley said.

The defense had to be stellar for the cardinal and grey, considering the offense had seven turnovers.

“I think our offense just needs to work on maintaining their blocks and keeping their plays fundamentally sound, senior defensive end Drew Smith said. “Those factors helped contribute to their performance in the first half.”

The offense was able to clean up their act somewhat in the second half, and after a fourth quarter touchdown by junior Brandon Reynolds, the Sequoits had no trouble downing the Scouts 27-14.

The first win of the season is always important for teams. It sets the tone for the coming days, weeks, and the season as a whole.

“This game means everything to our team, it gives us some confidence for the rest of the season,” Grindley said. “It really strengthened us as a family.”

Smith agrees that it was a big win for Antioch.

“Lake Forest’s program has a history of being really good, “Smith said. “Defeating them made some noise for Antioch football.”

With the win under their belt, the Sequoits look forward to next Friday, August 31, when they take on the 1-0 Thunder out in the cornfields of Woodstock North High School.