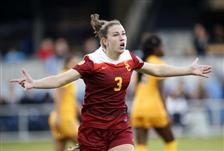 In the Big Ten Conference, with a 23-2-2 record, is West Virginia. The team finished their season as NCAA College Cup Finalists, as well as being the MAC Hermann Trophy winners. West Virginia is seeded No. 1 in the NCAA tournament rankings, and has been ranked No. 1 for seven consecutive weeks.
In the Pac-12 Conference, with an 18-2-1 record, is Stanford. Stanford won its second consecutive Pac-12 title, earned the No. 1 overall seed in the NCAA Tournament and advanced past the first round of the tournament for the 11th straight season during a successful 2016 campaign.
In the Pac-12 Conference, with a 19-4-2 record, is Southern California. USC claims their second national title in program history this past year. In 2016 they had two players, Andrews and Mills, named NSCAA All-Americans.
In the Southeastern Conference, with a 21-2-1 record, is South Carolina.  South Carolina women’s soccer standout Savannah McCaskill has earned a spot on the U.S. U-23 National Team that will travel to Spain for a trio of international matches next month.
In the Atlantic Coast Conference, with a 17-4-4 record, is North Carolina. Four members of Coach Anson Dorrance‘s 2016 NCAA semifinalist women’s soccer team were named to the sport’s All-ACC Academic Team as announced Tuesday by commissioner John Swofford.