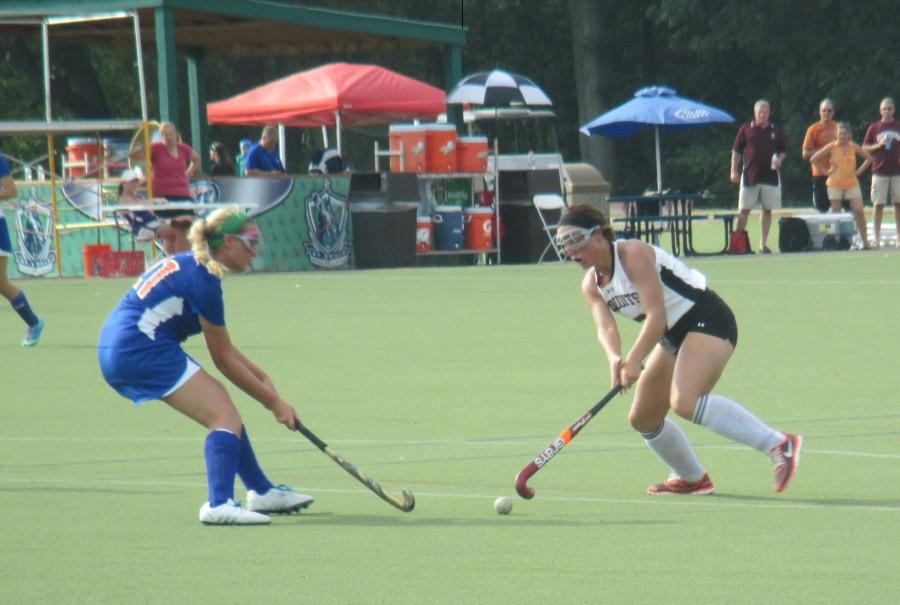 Senior Paige Gallimore fights for the ball in the game against University Lake School in the Gateway Classic Field Hockey Tournament in St. Louis, MO.

Junior defenseman Abby Vogel said, “The best part of the trip was hearing our name be called out for winning the pool. It was so great to see everyone so happy.”

Forty eight field hockey teams from all over the country traveled to St. Louis in hopes of winning the tournament. Teams from as far as Hollywood, Calif. hoped to return with a championship trophy and t-shirts. On Sat., Aug. 31, the Sequoits played University Lake School from Hartland, Wis. and tied 3 to 3. Later that day, Antioch crushed Clayton, a team from St. Louis, 5 to 0. On Sun., Sept. 1, the last day of the Gateway Classic, Antioch defeated Brentwood, a team from St. Louis, with a final score of 2 to 0 to win the championship.

“We learned that we can be successful when we stay positive and work together,” said senior Captain Alex Hare. “Winning has definitely brought us closer together because everyone wants to be the best we can be.”

While in Missouri, the team did not only play field hockey.  They also traveled around St. Louis to see important monuments, such as the Gateway Arch and the city museum. In addition to sight-seeing, the players took advantage of their time together to become closer as a team.

“Every year we go out for our traditional Spaghetti Factory dinner and go shopping at the mall,” said Vogel. “Both are great team bonding time.”

Junior Erin Dampf, who plays left defense, said, “Bonding was a big part [of the trip]. I feel we all got a lot closer, so that will help us work as a team in games.”

The winning of the Gateway Classic Tournament is a great start to the remainder of the Antioch Sequoits’ field hockey season. The team hopes to continue working together and communicating on the field to maintain their undefeated record.