What It Feels Like To be A Sequoit on Ice

By Shannon Price // As told to Alexandra Rapp 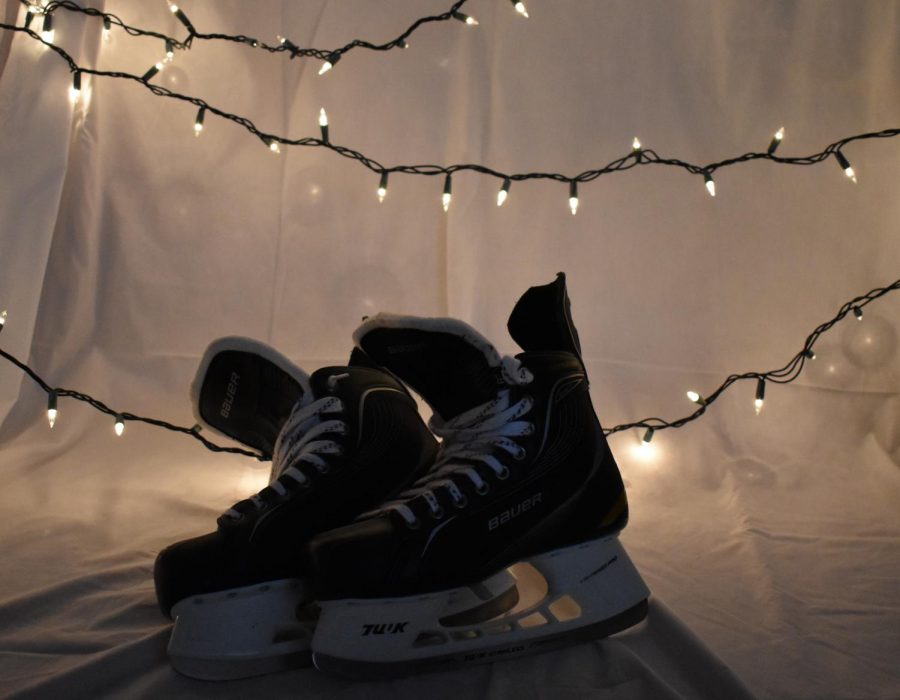 I hear the roar of the crowd increasing as the beat of our song fades out. The euphoria of the performance drains away and my face aches as my smile grows even wider. I look left, then right at my teammates to see the joy on their faces. My happiness increases tenfold. My family is together and we delivered an amazing performance. I can hear the announcer in the distance, but right now, the people around me are more important. As we step off the ice, our parents embrace us, adding to the sea of sentiment that threatens to drown me. The announcer begins to call the winners. Tension builds in my stomach. It seems like we skated well, but what if the judges think otherwise?

My team stands in a circle, united in our desire to win the first competition of the season in Kalamazoo, Michigan. Our heads are bowed and we face away from the announcer. He announces fifth place, fourth place, third. As he begins his announcement for second place our cheering section- comprised of parents, coaches, and other family members, breaks out into loud screaming and cheering. We don’t hear the score.

We look up. Who won? There on the scoreboard was “Wisconsin Edge.” The competition was over, we were the last team to skate this competition. People around me are screaming and jumping. It’s the first competition of the season and we did it.

I’ve been skating since I was six. First, my mom put me in swimming and when it became apparent that I was not enjoying it, she instead enrolled me in skating lessons and it sort of took off from there.

My first pair of truly real ice skates were a little pink pair from Dick’s Sporting Goods. My parents gave them to me and I was immediately hooked. I liked it so much better than swimming; it was much more community based and it gave me places to branch out.

I’ve made so many friends and I’ve accomplished so much in my 10 years of skating. Some of the people I got to know, people I’ve known for years now, are my closest friends. One of my team members, Breanna, who I’ve known since I started with the synchronized skating team that I skate with, is one of my best friends and she understands me like very few people do.

Skating and the people I’ve made friends with, the teams I’m a part of are very much like a family. I really think that it’s because we spend so much time together and we have to rely on one another for our performances. There’s this trust among all of us that is unlike anything I’ve really ever experienced in any other aspect of my life. We’re forced to rely on each other and that pressure to not disappoint anybody in any aspect of the team creates bonds. They just sort of happen; it’s an inevitable thing.

Sometimes I think there can be too much pressure. Some days are better than others. For me, the majority of the pressure comes from not wanting to let my team down. It would crush me to disappoint them. Recently, I’ve been feeling like I’m one of the weak links on the team and it’s really been weighing me down emotionally. There’s a heavy pressure to do well and to make sure that your team does well because if you make a mistake, even a miniscule one, even though your teammates will probably support you and say it could happen to anyone, it is on you. No one else is to blame- just you.

The worst that anyone could say to me is that they’re disappointed in me or in something I’ve done. If I feel like I’m disappointing somebody, it makes me feel like crap, to put it in the simplest terms. To feel like you’re the reason other people you care about are not succeeding is a really terrible feeling.

Even more recently, I’ve had mistakes that I’ve made that I keep making. Silly things that are easily fixable like forgetting the footwork or not turning all the way through our section. It might just be in my head, but I think it might be the fact that I don’t have the ability to change or fix the mistake that I’m making. I haven’t really talked to my team about how I feel. I don’t know if they feel the same way or if it’s all in my head.

Unfortunately, I can’t talk to my team about my feelings as much as I would like. It really comes down to time. I don’t get to see any of them very often, despite what they mean to me. I only ever get to see them during practice, unless they’re one of the few people who live around my area who I get to see more often.

Skating has truly become an integral part of who I am and my family as well. My parents have loved and supported me every step of the way; my mom is a team mom so she helps us out in the locker room. She’s a parent chaperone and I love having her around during competitions. She is a huge support system for me and the fact that she’s with me every step of the way is a huge help for everything I have accomplished. Both of my parents are super supportive; I can tell they love the thrill of it all. My mom is one hundred percent a skating mom, just as my dad is one hundred percent a skating dad. They’re so deep in it. They always have been.

My parents are a crucial part to my success in skating. They drive me places! If they didn’t think skating was worth our time they wouldn’t drive me to the rink. They wouldn’t get me up out of bed in the morning, my “late start” doesn’t exist because I use that time for morning skating practice and my mom has to kick my butt out of bed sometimes. The fact that they are as invested as they are means so much to me. I really like the fact that they’re so supportive. I like having a team with me and my parents are my best and greatest teammates.

I completely and genuinely enjoy skating because to me there’s no greater feeling than getting on the ice and feeling the cold air around you. Skating for me hasn’t been as serious the past few years because some of my teams haven’t been as successful so I’ve been able to focus on the fun teamwork aspect but now that my teams are getting better and success is becoming more of a reality, high scores, good placement is quite important. I think we’re great competitors and we deserve great scores.

Unfortunately, we won’t been able to prove it to the rest of the skating community this year. Despite the rising talent and success of our team, one of the people on the skating Board of Directors for our club made a clerical error and missed the deadline for registration and so even though all of the teams in our club, including mine, had worked so hard to get to the point that we are at we had our dreams of Nationals kind of taken away from us for something that really wasn’t our fault.

When we got the news, before the current season really even began, it was quite crushing for the seniors who are aging out of our club this year- it was quite crushing for all of us. Especially seeing the scores that we’re getting this season and seeing how we’re placing against some of these other teams, it’s an indication that we could have done it and now we don’t even get to try.

We need to use the upcoming competitions to prove we’re one of the best teams because we won’t get an opportunity to go to Sectionals and try for Nationals this year.

When we got this information that we wouldn’t be going to Sectionals this year we decided that every skate that we perform is going to be a revenge skate, to prove our worth. We are going to prove we don’t deserve the situation. We are going to have our revenge on U.S. Figure Skating. Every skate that we do, every time that we perform, we’re doing it because we’re showing people we deserve to be there even though we can’t make it.