What It Feels Like to Have A Resting Bitch Face 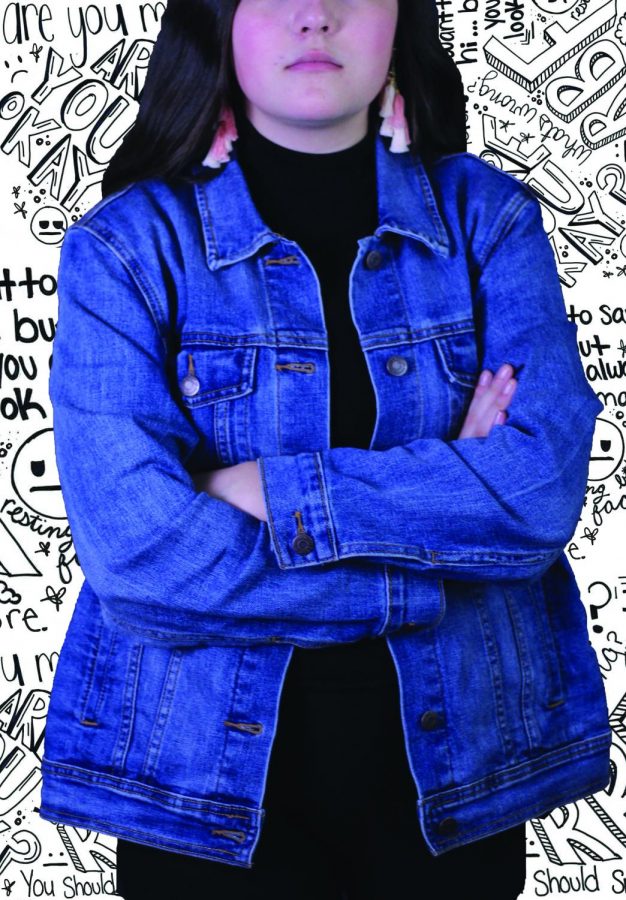 “I want to say hi, but you always look mad.”

“Why do you look so angry all the time?”

“You should really smile more often!”

The average person would not encounter these questions on a weekly, or even a daily basis. There is only a small handful of people who know the typical recurrence of these, quite frankly, annoying questions. These people know who they are and exactly what I’m talking about. I’m talking about the infamous “Resting Bitch Face.” Yes, I’m talking about the people who look like they hate the world when they are simply walking down the halls or sitting in class. Trust me, I know the struggles of this condition, because I, too, am a victim of the permanent frown.

Any person who has an RBF, would say that they had no idea they had one until someone said something. I, however, found out a different way.

I didn’t really think much about it at the time; it was a normal school day, and I was in Spanish class doing my work whilst sitting with my friends. My friend decided to take her phone out and take a Snapchat. I happened to look up at the last second to see her click the button. She said she was going to put it on her story; I initially didn’t care. I didn’t think anything of it because I thought the picture is probably going to be just fine.

I was wrong; I was so wrong.

It was later that I had seen what I really looked like and I’m not going to lie, it was slightly terrifying. Not because I had looked disheveled; no, it was the face that coldly stared back at the frozen screen. My mouth was completely down turned, my eyes narrowed, my brows furrowed and my stare was so cold that it frightened me—all I did was look up from doing my homework.

The thing is, I thought I was going to look cute, like it was going to be one of those candid pictures that people post on social media all the time. Instead, all I could think was: “Oh my god, what’s wrong with me?”

It was in that moment, that I realized I was a part of the RBF tribe.

I started remembering all the small comments from previous years that I originally thought nothing of, like a teacher of mine telling me he never knows if he should greet me in the halls, my mom telling me to smile before going to a job interview or a kid in my chemistry class repeatedly asking what was wrong. It all started to make sense.

What others don’t realize is that having RBF has a number of negatives. People who don’t know that you have one automatically assume that you are mad, upset or just a plain rude person. It isn’t really the most wonderful thing to hear when someone tells you they are afraid to greet you in the halls just because of your face. I could be the sweetest person alive, but no one would ever be able guess it. I guarantee not a single person has walked past me in the halls and thought to themselves, “she looks like a happy person!

But, it’s not all that bad. While it does have numerous negatives, it does have notable positives. It feels pretty great to have your own personal catcall repellent. Nobody will talk to me or even try to argue with me when I look like the human embodiment of hell. I am the furthest thing from a morning person and at 7:30 am I’m not looking for any sort of social interaction, and having a permanent frown completely works in my favor.

A common misconception is that my face also embodies my personality, which is not the case at all. It’s like a smack in the face when people tell you that you’re a lot nicer than they thought you would be. I know I look like I want to die on the outside, but on the inside, I’m the person that cries at videos of golden retrievers and the “Friends” series finale. I cried after leaving a pet store because I wanted a puppy so bad. If you ask any of my friends, I’m the one who laughs at everything and is the one to show them stupid videos I found funny on the internet.

The issue is that having an RBF is automatically seen has negative, even if it does have many positive effects. An RBF is almost never talked about in a positive aspect, ever. I’ve seen articles on women getting botox to remove frown lines and lift their smiles. People have made this out to be so negative that people feel compelled to physically change their features. Has anyone stopped to think, “Why does this even matter?” It really is just someone’s face.

I’m not going to lie, I think an RBF can be very empowering. In certain settings, it can come as an advantage. My RBF makes me feel serious, pensive and reserved, like someone who only engages with those who deserve it. I think as a society overall, we should stop making people feel ashamed of their normal face. I’m sure someone who smiles all the time isn’t told that they should frown more often, because that just sounds ridiculous, right? Maybe if I wasn’t told to constantly smile more I would have never seen my RBF in a negative way to begin with. I didn’t know I had one until my sophomore year. Before that, I had never felt insecure about what I looked like when walking to my next class.

Over time, I have come to terms with my permanent frown. I am able to joke about it now, but that’s not the situation for every person. I’m lucky that I feel this way about my RBF, but there are plenty of people who are still ashamed of their own. From scaring off catcallers to avoiding people I don’t want to talk to, I’ve learned to love my RBF. Any person, man or woman should be confident in their forever frown. Yes, it would be nice to not scare everyone off, but who has the energy to smile at strangers all day anyway?