What it Means to be Asexual

The struggle to realize asexuality is a common issue everywhere. 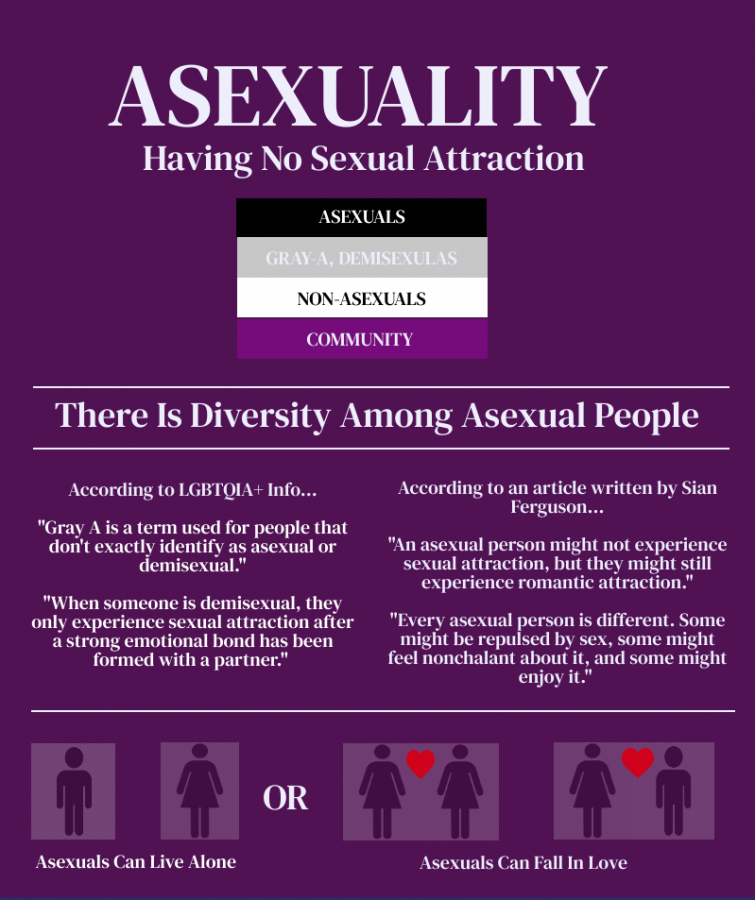 This is an infographic about asexuality, including quotes about asexuality or from people who are asexual. People that are asexual fall on the scale of having little to no sexual attraction; this can be true for either gender. According to nih.gov, they said, "A total of 325 asexuals (60 men and 265 women; M age, 24.8 years), 690 heterosexuals (190 men and 500 women; M age, 23.5 years), and 268 non-heterosexuals (homosexual and bisexual; 64 men and 204 women; M age, 29.0 years) completed online questionnaires."

Within the LGBTQ+ community, there is a sexual orientation called asexuality. According to whatisasexuality.com, an asexual (or ace) person is someone who does not experience sexual attraction to either gender.

“Current statistics suggest that about 1 percent of the population is asexual, though many experts think that the number may be higher,” according to Igbt.williams.edu.

“Sometimes there is an environmental factor like trauma, bad experience, bad relationships or someone who could be really focused on their career and not focused their interests on sex,” Psychology teacher, Jaclyn Orlov said.

On top of the nurture factors that play into becoming asexual, there are physical factors as well.

One example of this according to Orlov, could be that an asexual may have low hormone levels. If you are female, having low levels of estrogen results in a lower sex drive. The same is true for males. If you are a male, having low levels of testosterone results in a lower sex drive. This could lead to someone becoming asexual because they don’t share the same drive as others.

In the community, they have a flag for asexuality represented with black, gray, white and purple which all stand for a part of the community that makes up the umbrella term, asexual.

“Like the other pride flags each colored stripe has a different meaning; black means asexuality, grey means grey-asexuality (a grey area between asexuality and sexuality) and demisexuality, white means sexuality and purple means community,” medium.com states.

Finding ones sexuality comes with time, and discovering oneself and who people are attracted to will fall into place. Sexuality is a unique part of everyone that comes with identity. Even in the case of asexuality, people can find ideals that they agree with or simply respect what asexuality is. In the event someone finds themselves agreeing with the ideals of asexuality, one should continue to pursue it and keep on finding new characteristics that define them as a person.